Happy Tax Day!!!! We did our taxes early this year. So we could relax today.
It took me so long to write this poem. I'm just going to post it and this will be a very short post. I have to go to sleep sometimes.:) When I start working I'll have to go to sleep earlier. That will probably be next week.
Here is the prompt for today: Use the title of a poem you like and change it. Write your poem to the title you chose and either follow the form of the original or write your own. Here is the original prompt from Poetic Asides with Robert Brewer.
"I want you to take the title of a poem you especially like (by another poet) and change it. Then, with this new altered title, I want you to write a poem. An example would be to take William Carlos Williams' "The Red Wheelbarrow" and change it to "The Red Volkswagon." Or take Frank O'Hara's "Why I Am Not a Painter" and change it to "Why I Am Not a Penguin." You get the idea, right? (Note: Your altered poem does NOT have to follow the same style as the original poet, though you can try if you wish.)"

Two Men Diverged in a Band of Gold

Two men diverged in a band of gold

And sorry I could not handle both

My being one woman, so long I pondered

Looking from one to the other

Far into the underneath of their natures

To where the future met in untrod paths

Then took the other, not as fair of face

Having a better claim for being the worse for wear

The needier one, a little unkempt, chubbier, raw

Not entitled as the other.

And both that summer gleamed for me

Oh, I said goodbye to one that day

Kept the memory of the other at bay

Knowing this would probably be the end

I am telling this with a sigh

As the years have come and gone

Two men diverged in a band of gold, and

I took the one less entitled, more truthful

And what has come of that difference?

(Original poem: The Road Not Taken by Robert Frost) 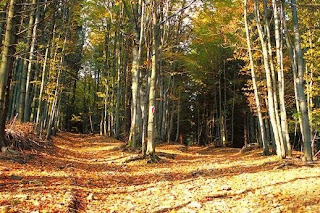 THE ROAD NOT TAKEN

Two roads diverged in a yellow wood,
And sorry I could not travel both
And be one traveler, long I stood
And looked down one as far as I could
To where it bent in the undergrowth;

Then took the other, as just as fair,
And having perhaps the better claim,
Because it was grassy and wanted wear;
Though as for that the passing there
Had worn them really about the same,

And both that morning equally lay
In leaves no step had trodden black.
Oh, I kept the first for another day!
Yet knowing how way leads on to way,
I doubted if I should ever come back.

I shall be telling this with a sigh
Somewhere ages and ages hence:
Two roads diverged in a wood, and I--
I took the one less traveled by,
And that has made all the difference.


We're halfway through the Poem A Day prompts and I am having so much fun writing. I hope that all of you are joining in and either writing or reading a poem a day. I am getting poems from Poets.org in my email and I'm saving all of them and will put them in their own folder so I will have all these great poems at my fingertips. Remember too that Poem in a Pocket Day is April 30th. I will remind you, but on that day you need to carry a favorite poem and put it in someone's pocket without them knowing you did it.:) It's kind of like Secret Santa with poetry.:) On that day I will point you to a great website where you can find any poem you want. Until then have a great day!!!

Posted by Barbara Ehrentreu at 1:56 AM