Because we took a trip up to Albany this weekend to see Kathy Mattea - pictured above - I fell behind in posting this weekend. I wrote the poems and posted them on the Poetic Asides with Robert Weber website, but didn't post on here. So I 'm putting all three of them in this post. :) 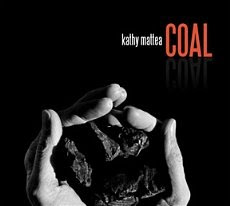 Kathy Mattea was amazing. She has a beautiful clear voice and her songs were mostly about growing up in the Appalachians. Her father was a coal miner and she has a brand new CD out titled "Coal". I dare anyone to listen to some of these without a tear in their eyes. She moved away and went to college, but she has kept the experience inside of her. It was a great show and she is the real deal. Marty Stuart, who is also the real deal, produced it and Ms. Mattea who is a two time Grammy winner might be taking home one this year. The album has been nominated.:)
A bit about Hampton Inns. The one we were in had very poor ventilation in the room. No one could sleep. It was too warm with the air conditioning off and when you put it on the fan went off at a certain temperature leaving no air in the room. I have been in this hotel before and didn't have this problem, so it must be a local problem for this particular one in Latham, NY. The rest of the room was fine and the service was great except they advertised wi fi and didn't have it. We hooked up my laptop and couldn't get internet. In order to get it I'd have to take the ethernet cord and put it into the modem. However, they had the cord secured on a plastic hook and it wouldn't come out. So no internet for me last night. However, the good thing was it forced me to concentrate on my own work with no distractions and I wrote Chapter 23 !!! Yay!!! The story is taking an interesting turn that I had never expected, but I'm going with it.:)
Here are the three poems as promised and before I post them, please let me know if you visit the blog. You can either leave a comment here or on my Facebook profile page. I'm interested in knowing your reaction to these. :)
Day 17 - Prompt: "I want you to write a poem with the following title: "All I want is (blank)," where you fill in the blank with a word or phrase of your choosing."
Here is mine. This was kind of dashed off.
All I want is

my book to be published, family harmony,
world peace, my old thin body,
to be twenty years younger
sunshine every day,
the man I knew at twenty-one
laughter from Sara
global warming to reverse and
the toast not to burn.
copyright 2009 by Barbara Ehrentreu

Day 18 - Prompt: "I want you to write a poem with an interaction of some sort. The interaction does NOT have to be between people, though it can."
I originally wrote one about someone I met in the hospital, but didn't post that one. Instead I posted this one, which is a more usual interaction. Anyone who has health anxiety or knows someone who does will appreciate this one.:)

“Are you sure I didn’t hit my head?”
"Yes," I say to my anxiety - crazed daughter.
“But I’m sure I was close to the wall.”
“No you weren’t. It wouldn’t be possible.”
She feels the phantom spot again where
she swears her head was injured.
Silence happens for awhile, but I know she
is spinning that scene around in her head in
an unending loop.

“I walked by that plant and I thought I ate part
of it,” she says at dinner in the Mexican restaurant.
“You what? You think you ate part of a plant
on your way to the restroom?” My mind tries
to find a way to accept this as she walks over
to the plant and re-enacts the scene.
“It could have happened, “ she says her hazel
eyes trying to make sense of the act.
“No,"Sara and I both say eager to smooth over this
bump in our night out.
“I’m worried it might be poisonous.” She has
continued as we attempt to ignore her.
“We’ll ask the waiter, he must know.” She won’t
rest until she knows. The reel won’t stop spinning.
“That plant, “ he asks pointing to the offending palm
in the clay pot in the back near the tiled wall.
He doesn’t answer. Then he says, “What you don’t
know is there are no real plants here. We had to
replace them years ago. They’re all artificial.”
We laugh and the sound fills the space around us
healing and right. She smiles, a sheepish grin.
Aware she is caught. “Oh, well, but are you sure
I didn’t get any in my mouth?”
I grit my teeth and hold the anger. It would be like
yelling into the wind. I hug her instead.
copyright 2009 by Barbara Ehrentreu
Day 19 - Prompt:" ....today's prompt is to write an angry poem. That is, a poem about someone or something that gets angry."
Strangely, this poem was the easiest for me to write. Someone I know very well was the model for it this weekend.:)
His Anger

It creeps up on us
Like a tiger hiding in the bushes
One minute it’s peaches and cream
He’s smiling, expounding, joking
And the next exploding
Voice harsh, cold, sarcastic,
mean, drilling its way into our
egos even if we are in the right.

Who made the wrong turn? He can't
accept the mistake. Yet he shuts us
out as if we were in a glass room –
We can’t reach him when he crawls
into his anger coat.
He becomes the fairy tale ogre
The bully, the villain

His voice slaps our faces
Through our armor
of caring and love.
copyright 2009 by Barbara Ehrentreu
****************************************************************************
Coming on Thursday, April 23, 2009 as part of the blog tour I will be interviewing a new guest author, the award winning, John Wayne Cargile, who is named after the famous actor. His new book,The Cry of the Cuckoos is getting great reviews and I am very pleased that he has consented to be a guest here. I will be giving you more information, but for now, please note this date and come and learn more about him. He has led a very interesting life including working for the FBI. Also this book is very relevant to what is happening in our country today. See the video here.He is giving away an e-Book: My Metaphysical Musings, which is composed of all of his newspaper columns for three years. When you come join us and leave a comment or question you will be in the drawing for this! More tomorrow! Until the next time have a great Monday. :)
Posted by Barbara Ehrentreu at 11:09 PM