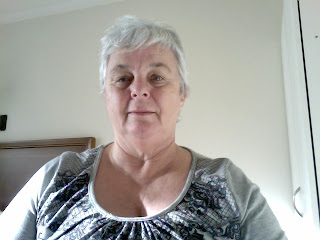 Today I am very pleased to have Sue Perkins as my guest author. She comes from New Zealand and she is a return visitor to this blog. Sue is back to tell us about her new book, The Sixth Key and I am very excited to have her back here again!!! She is going to let us in on her secrets of how she builds her worlds in her stories.

Thank you Barbara for kindly hosting me today. My fantasy romance The Sixth Key is set on the alternate world of Sacral, a world ruled by telepaths. Although it's classed as an adult book, it's suitable for sixteen years and upwards. 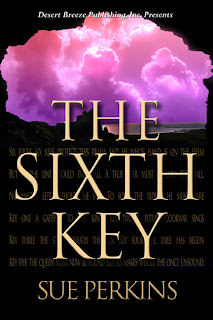 I love writing fantasy books for both adults, young adults and middle grade ages. There's something fascinating about making your own world and filling it with people, landscapes and animals of your own creation. The characters often take over the book and tell me where the story must go and what they think of the way they are portrayed. Sometimes this is a help, at other times I dig my heels in and insist on getting my own way. Between the characters and myself we have a 50-50 success rate.
How do I build my own world? Every author has their own way of building a world, be it real or fantasy. My way is to develop my characters capabilities. This usually dictates the world they relate to. Riley, the heroine of The Sixth Key, was slightly different as she came from Earth and landed in Sacral as a result of an accident. She then had to fit in, but the telepaths of Sacral were another matter. They were able to do small magic, telepathy and other psychic powers. Then the question was how did they become magical? The planet had to have something to do with their abilities and everything regarding the world building developed from this point.
This is also how I create the storyline. It falls into place as I write. Often something is written in and I wonder why as it has no bearing on the story. By the end of the manuscript the anomaly has been explained and I have an "of course" moment when it slots neatly into the rest of the book.
I hope you enjoy the excerpt below and don't forget, leave a comment and be in to win an ebook version of The Sixth Key at the end of the blog tour.
Riley is having a terrible day and it gets worse when she's knocked down by a truck and whisked into an alternate world where telepaths rule and mutes fight for the right to exist. The telepaths want to find out how Riley shields her mind, something she believes is automatic to the humans of Earth. She is caught between the man who brought her to Sacral and the leader of the Mutes. Riley unearths secrets from Sacral’s past and sets out to solve the Riddle of the Keys and the true identity of the King of Sacral.
Buy Link:  http://stores.desertbreezepublishing.com/-strse-324/The-Sixth-Key-Sue/Detail.bok
Website: http://www.sueperkinsauthor.com
Excerpt:
Riley stared in disbelief. Two flying horses headed in their direction. She gulped nervously. Zlora had asked about riding -- not flying. Her novice experience might have been able to cope on the ground, but flying through the sky with so much space below her? What about the gravity itching to drag her down to earth? A shudder of apprehension passed through her.
The flying horses landed and pawed the ground. Up close they looked completely different than the horses of Earth. They were twice the height of a normal stallion, but much finer boned. Once they had landed, the wings folded neatly along their sides. A glorious black stallion and a delicate golden-brown mare stood before her. Both sets of wings were pure white.
The black lifted his head and looked at her. Riley's eyes opened wide as he gazed intently at her.
I hope he's not my mount. He looks mean.
"I'll take the black and you can have the brown." Zlora headed for the stallion. The tension in Riley's shoulders relaxed as she moved toward the mare. Unfortunately her relief didn't last long.
The mare stood quietly while Riley used a large boulder to clamber on her back.
I wish I could spring up on her back, but I'd probably end on the ground on the other side.
Zlora took off immediately, and before Riley had time to think, the mare followed.
One moment she'd been settling herself on the mare's back, the next they were airborne. Riley tilted backward; she grabbed the mane and dragged herself down onto the neck of the mare, where she hung on for dear life. Luckily her mount didn't need guiding as Zlora's stallion led the way.
Riley eventually settled. Carefully -- and swallowing quickly to keep the contents of her stomach -- she looked down at the ground flying past. They'd left the forest far behind. They nowI flew over cultivated fields. The flight became enjoyable, she watched the changing scenery with interest until her flying horse abruptly headed down to earth. Ahead she saw the reason for their descent.

Sue certainly brings us into this new world and after reading this excerpt this is another book going on my TBR list.:) To win a free ebook you need to leave a comment on this post or any of her blog posts during the tour.

Until the next time, Sue will be back on August 1st to talk about her other new book  Dragon's Clan, so don't forget to come back for that visit. In the meantime I wanted everyone to know that two of my poems will be up on Jellyfish Whispers on July 25th. I will have the link when they are posted.

Hard to believe my birthday, July 31st is almost here!!! I'm thinking about what to do for it this year. Last year I had people support one of my charitable causes. This year I have no idea what I'll do for it. I know at my age I should be taking birthdays in stride, but they still mean a lot to me.

August 21st I will be having a special edition of my radio show, RRWL Tales from the Pages. I have taken a long hiatus due to personal reasons, but I am having Amy McCorkle on the show and it should be a lot of fun. I will probably keep reminding everyone.

Finally, thank you to all my new followers and to the people who continue to visit even during the summer. I really appreciate everyone who has contacted me both on Facebook and on Twitter and I hope to be able to contact you in some way. If you are interested in reading some excerpts from my YA novel, If I Could Be Like Jennifer Taylor, they are posted on the Muse blog.

Don't forget to leave a comment for Sue so you can win a free ebook.
Posted by Barbara Ehrentreu at 1:52 AM 7 comments:

Labels: Barbara Ehrentreu, Desert Breeze Publishing, if I Could Be Like Jennifer Taylor, Sue Perkins, The Sixth Key 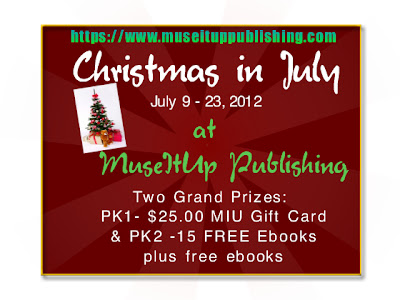 MuseItUp Publishing is having a hunt and I am part of it. Just find the Christmas tree, which is hidden somewhere on this blog on any page and then go over to the other 14 blogs to find the remaining trees.


Good luck to all the players!!! The way the contest is made everyone can win a prize. Go to the Muse Contest page to find all the details and start playing Now!!!! Everyone who participates can win a free ebook by finding the Christmas trees on the Muse website!!! Have fun!!!

Posted by Barbara Ehrentreu at 8:54 AM No comments: