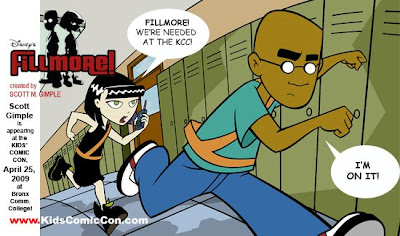 I seem to be playing catch up with posting these poems. The poem for Day 24 is very short, so I'm posting both of them here.
First, though, thank you to all who left a comment or question for John Wayne Cargile. This was a very lively discussion and I'm hoping that all of you will buy his book and when he comes back later on we can have a really good discussion about the book.:)
Today I went to Kids Comic Con for a few reasons. The first one was to meet up with a friend online with whom I've been trying to meet for a year.:) The second was to check out all the graphic novels there are for kids. I met the author of a picture book about a hamster with super powers and he may be a guest author soon.:) I also met the creator of a series of dolls that portray Africans in an elegant way. The woman says that kids aren't playing with them, because they are too beautiful.
I met the creator and the people who draw and color the pictures for the new Archie series and had three souvenir comics autographed by Dan Parent. I was going to write about going to Kids Comic Con, but it wouldn't come the way I wanted it. It's written, but I'm not posting it.:)
There has been some talk about swine flu and how it is becoming a pandemic, but up here in Westchester I'm not getting too nervous until they tell us to put on masks. I know they're wearing masks in Mexico City where it originated. One way to prevent getting sick is to wash your hands every time you have contact with anyone or with any surface. You can keep the bottles in your pocket or handbag for when you aren't near water. I used to do that when I was going from house to house selling insurance. I had a bottle of disinfectant soap in my car and used it between visits. Also taking a lot more vitamin C is a good idea. It can't hurt.:)
Prompt for Day 24: Write about travel - a trip of any kind. I have another poem that is much longer, but will save it for another time.:)

On the road there is no time
As the pavement passes, you
concentrate on your needs
Hunger gnaws and tempts
At the rest stops where chips
wink and candy begs
you shove
bags of it into the car –
Forbidden snacks like Hostess Twinkies
appear in your hand, You grasp the
wheel and a Twinkie thinking could life
be any better?
copyright 2009 by Barbara Ehrentreu

Prompt for Day 25: Write about an event. This was pretty hard to do. I wrote three of them, but chose to post only this one. This poem is based on a real event that happened to us on Saturday. :)

On our way to the usual place
Where we always got our coffee
Hot and tired, thirsty from denying
Ourselves even water and living on
Tic Tacs.
We heard this squeak and crunch
In a place where no sounds ever came
When you put your foot on the brake
We thought it a flat tire and in half a block
Found a service station as if a guardian
Angel had been following us.
“You have no brakes,” the owner not a
mechanic told us corroborating with his
cashier – the mechanic gone home.
He drove the green Mitsubishii into a spot
We called AAA the brakes no longer working
We needed a tow. When AAA told us the tow
Truck would be there in an hour we called Hal
Angry to be bothered after his own journey in
Eighty degree weather on the busy highways.
Only one space in the tow truck
We’d need a ride home and Hal, father, husband
Retriever, would come to our rescue.
Visions of food and computer swam before our
Eyes, but first the thirst which overpowered all
Other thoughts must be quenched with the drink
For warm weather – light frappaccinnos – to soothe
Our tempers and moisten our mouths.
Hal, the ever obedient, never docile arrived on time.
We waited for the tow truck in air conditioned comfort
Reading comics we had gotten at Kids Comic Con
And my eyelids drooped from the heat and the hour.
No tow truck for two hours and we decided on a plan.
He’d be there within a couple of hours
Leave the key in the unlocked car and go.
Sure the car would follow us we departed to dinner
And still no car at the place we specified.
No car and the time crept ever onward
Then at last the sounds of Hal’s cell phone
And the AAA on the phone. At three AM they
Delivered the towed auto – eleven hours later
copyright 2009 by Barbara Ehrentreu

More about everything tomorrow. Sunday, April 26th will be the last day for comments on the guest author blog for John Wayne Cargile. The drawing will be held Sunday night. So if you were planning to leave a comment or question to get into the drawing do it today:)
Hope it's a great day for you. Until the next time, thank you to all of my readers.

Posted by Barbara Ehrentreu at 2:09 AM