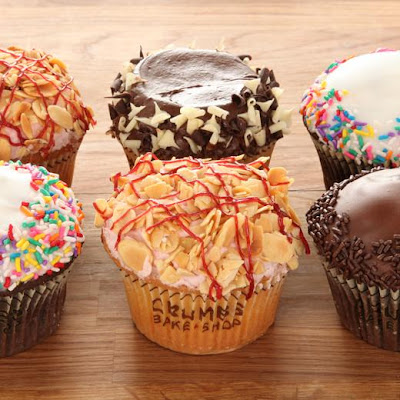 Passover cupcakes from Crumbs from: http://thedailytruffle.com/2010/03/unleavened-passover-cupcakes/ 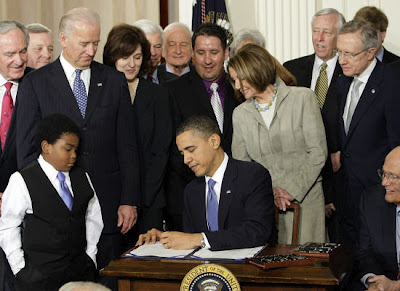 President Barack Obama signs the Health Care Reform bill into law on March 23,2010 while Vice President Joe Biden, Speaker of the House, Nancy Pelosi and Harry Reid observe.
It's too late for me, but it isn't too late for my daughters. This is a day that was one hundred years in the making. Millions of people will be affected by this law. Yet this law has flaws. It has no real public option for those people who can't afford to get health insurance. We are not there yet, and as a progressive I feel sad that some of the core principles that we have worked years to achieve are not addressed. One in particular is the prohibition of federal money for abortions. I am not thrilled with anyone getting an abortion, but I believe it is a woman's right to choose and decide for herself. These will be addressed and hopefully there will be changes soon.
I am reminded of my post about Senator Ted Kennedy and what I said in that post about how they should pass health care for Ted Kennedy and now I am hearing Senator Chris Dodd talk about Ted Kennedy's input on this law. I said at that time when everyone was mourning Ted Kennedy:
"...it will be Ted Kennedy's ghost observing from his Senate seat holding his thumb up and cheering... for Health Care Reform as they work to pass the best health care reform bill ever to reach the Senate. And I see the victorious press conference of those who worked to pass the bill giving credit to Ted Kennedy for his untiring efforts while he was alive."
Not only did he get credit, but Nancy Pelosi spent time discussing his commitment to passing health care reform. The President also gave him a great deal of credit. It seemed that health care reform was going to be tabled earlier this year, but suddenly it arose out of the committees and wound up on the floor of the House and the Senate. Then Progressives started finding flaws with the bill and on the other side Republicans and Conservatives started telling us that it was dangerous. Now the Republicans are trying to repeal this law. But too many people need it and I have a feeling that the Republicans have no idea what is going to happen when it goes into effect. No one is going to want to give up some of these new things.:)
In case you don't know how I feel about the new Health Care Reform Law from all that I have said so far, either you were interrupted while reading, found a great TV program that you had to watch, or maybe you don't care, I am thrilled that the Congress was able to pass such an extensive law and I support it one hundred per cent. Though I would like to see some additions to it.:)
Okay, enough of the politics. I wanted to let you know about an awesome event happening on one of my new friend Evelyn's blog. She calls it a Writing-Prompt Carnival. Of course, I entered something on there and you can go check it out. If any of you remember, it is the post that I wrote for the last day of April last year when I posted a poem a day each day in April. The post is about my Newfoundland dog's last night, and it was written because I wrote the poem about him. The writing prompt so touched me and reminded me of the expression in my dog's eyes the last time we saw him. He died the next day without us there.
One last piece of business. When Janie Franz was the guest author here we gave away a free book. The person who won that book has not contacted me and it has been over a month. So I have to do a new drawing and will be sending that book to a new winner. I feel sorry for the person who didn't contact me. They missed out on a great little novel.:)
Now for more shameless promotion.:) This Thursday, March 25th is the day of my show, Red River Writers Live Tales from the Pages and my guests will be Jody Feldman and Melanie Hope Greenberg. Jody is an old friend from one of my first critique groups and Melanie is also someone I know a long time who is an amazing illustrator and writer. Melanie Hope Greenberg is back this month to continue the discussion we started about the celebration of Women's History Month in March by her group with an exhibition of their illustrations, panel discussions and book readings in independent bookstores in Brooklyn. Last month we focused on the authors themselves, who are all children's picture book writers. Melanie is back to talk about both herself and this event. Please join me and my co-host Freda Roberts at 3PM Central Time for this outstanding show.
Also, I hope people are reading my Examiner. com articles. I am the NY Literature Examiner, which is funny, since I don't live there anymore.:) My next article is going to be an interview with a new author, Zoe Magnon who has published her first poetry book. Zoe also is the originator of an organization to help developmentally disabled children in the Caribbean.
Until the next time, thank you to all my readers. I appreciate all your comments and if this is your first time here, yes, I always meander like this.:)
Posted by Barbara Ehrentreu at 10:03 PM 6 comments: 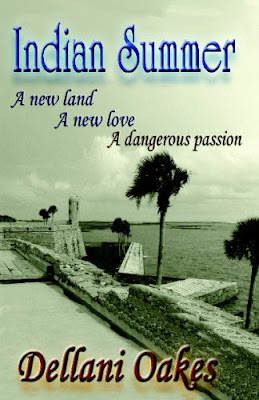 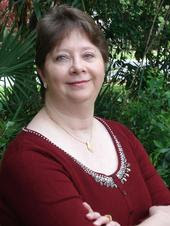 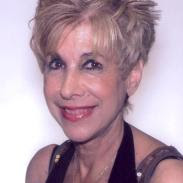 What writers make your heart sing? 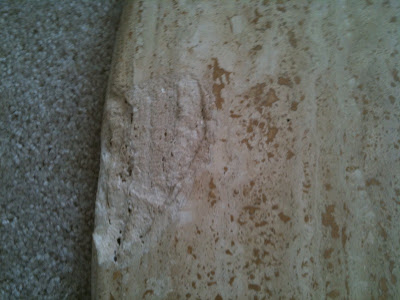 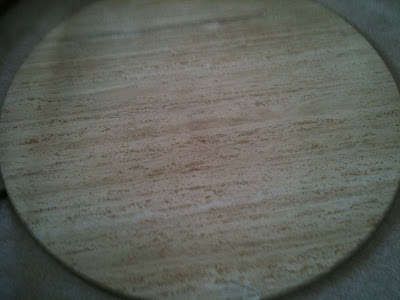 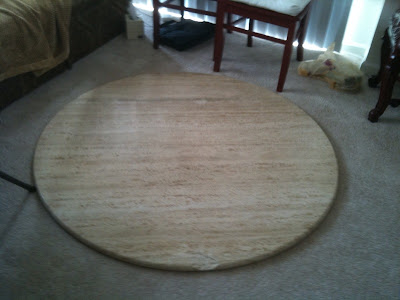 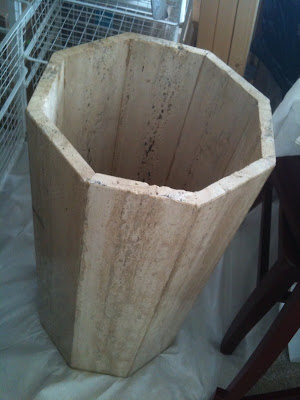 This is the base
Last week I wrote about Words Matter Week. I had hoped to take part in every blog challenge, but my real life interrupted. More about that later. What follows is the blog challenge:
Writers are people who take isolated words and craft them into memorable phrases, stories, poems and plays. Who are the writers who make your heart sing? What is the magic ingredient?
The joy of reading for me comes from having read authors who do make my heart sing. You know you are reading a memorable piece when you can't predict the ending and the author has used words that bring images to your mind. You start reading the story and suddenly you are transported and no longer realize you are reading. I have been so mesmerized by a story that I have spent hours in one place reading. I have forsaken creature comforts to finish a story that is gripping me. Why does this happen? What will cause a reader to do this?
For me it's the writing. The author catches me practically from the beginning, but if I am not captured by the story it is the writing and the descriptions that will keep me reading. I have read two or three chapters sometimes without getting that spark, but if the writing is clear and to the point at some point I will be glued to the pages. These are my favorite writers and while I'm reading one of these books I will find any excuse to pick up the book and read.:) Only a few authors have elicited this kind of behavior in me. However, if it is not a story by one of my favorite authors, if the story makes sense to me and the characters are believable I might have that response.
My taste in reading is fairly eclectic. Lately I have gotten into science fiction and urban fantasy. But my favorite novels are usually ones with several different characters whose stories run parallel until they meet and then their intertwining creates a situation that moves to the climax of the novel. However, I like suspense too and if it is done right I might even read a mystery. As a YA author I read a great deal of YA novels. Occasionally I find one that I can't put down or that intrigues me so much I am unable to stop reading it.
Here are the authors in no particular order whose words make my heart sing: Stephen King, Barbara Kingsolver, John Irving, Jim Butcher, Kate DiCamillo, Paula Danziger, Mark Twain, Jane Austin, Louisa May Alcott, Carolyn Keene, Avi, Richard Peck, J.K. Rowling, E.L.Konigsburg, Lois Lowry, Anne M. Martin, Francine Pascal, Cynthia Rylant, Jerry Spinelli, George Simenon, Nora Roberts.
At one time in my life each of these authors has written something that has gripped me so much I couldn't stop reading. It's hard to say what was the magic ingredient that did that for me, but it was probably well written books with believable characters and situations that kept me on edge until the end. You will also notice that this group is composed of both adult and YA authors. Now who are the authors whose writing makes your heart sing? Why not take the blog challenge and become part of Words Matter Week, like I just did? Also, please leave a comment and let me know your favorites and why.
Now for a totally different topic - my continuing saga to try to get settled after the fire damaged my home and we had to move. Here is one more f---ed up chapter in that saga. Our marble table was damaged by the smoke removal people when the guys moved it without padding over stone steps and damaged the top by taking a 3 inch chunk of marble off of it. We are now in our new apartment and the table top is in the middle of our living room!! We have come to a standstill in unpacking, because we can't move the table and have no table at all! To their credit the ServPro people are going to absorb the cost of the table, but they need to remove it.
It makes me sad because we have had this table for almost 30 years and they no longer make this size table in travertine marble, like the one we have. I have put the pictures of the damaged table here so you can see what a beautiful piece this is. But my husband is ready to move on and get a new wooden table to replace it. I can't wait until my life goes back to normal. Oh, wait, what is normal?
Thank y0u to any new readers and of course, thanks to the readers who continue to follow my crazy meanderings. Seriously, this blog has kept me relatively sane.:) I appreciate all the great comments you have given to me. They have helped me so much!!
Posted by Barbara Ehrentreu at 9:16 PM 6 comments: