Shaken to the Core! 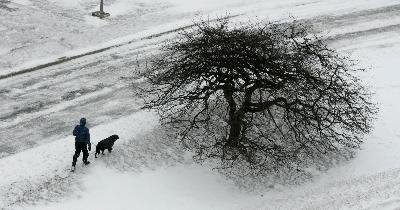 Taken in Yonkers, which is south of where I live.
First of all, would the networks please stop warning us that we are getting the worst storm of the year? Maybe it's because I lived in Buffalo and eight inches was the norm there, but today's snowstorm was a bit of a bust. Yes, it was snowy and blowing and a lot to dig out, but when I looked out of the window at around 6:30 AM the street was pretty clear. I guess I'm used to a big snowstorm being one that kept us inside for three days. That was back in 1977 in Buffalo and we called it the Blizzard of '77. Traffic couldn't move at all. There was so much snow they had to dump it in Lake Erie. I remember that on our street when the snowing and blowing finally stopped our neighbors had to take turns pushing each other's cars out of the snow drifts caused by the plows and the blowing snow. The snow was three feet high!! We had a dog then, a Newfoundland, and we walked him in the street since people hadn't shoveled their walks. On both sides of us the snow that had been plowed and was piled over ten feet high. So it seemed like we were walking between two walls of snow when we walked in the street. After the snowstorm someone printed a button: VBW '77 - Veteran of Buffalo Winter, '77. Now that was a storm. This was a minor inconvenience.:) Yet they closed schools. Maybe for people who live on Long Island, where we used to live, it was a little more than that! But up here in Westchester, it wasn't so much.:) The paper says that we got about 10 inches. I thought you might like to see some photos of what it was like here. Also if you want to get the flavor of what it was like here are some slides with the actual commentary from the radio back then.
The title of today's blog refers to how I felt after seeing "24" tonight. I don't think I've really talked about this, but I am a big fan of "24". I'm not as much of a fan as my daughter, though, but it's because of her that we all got into watching it and I've been watching since the second season. We caught up by getting the Season 1 DVD's and marathoned them one whole week to watch them all. Now I never miss a show. I'm usually a very vocal watcher and between my daughter and I we are always either yelling things at the screen or screaming or holding each other's hands. But tonight I was really upset.
I've read a lot of the articles that say that "24" goes too far in portraying torture, but this has nothing to do with that. In tonight's episode a group of armed soldiers from the mythical Zingala invade the White House and attempt to kidnap the president. I was horrified to see how this could be done. They came in from a subterranean area using a blowtorch. Obviously they had a man inside who disconnected the electrical grid so the alarm didn't sound. They shot everyone they saw and eventually, though the president was locked down with Jack Bauer, they got her daughter, who happened to be visiting her, and used her as bait to get the president to open the locked door. General Juma took everyone in the White House as hostages and made them sit in front of the door too. But the part that had me shaken to the core was when General Juma slapped the president of the United States!!! I mean it was the president. I have never seen anyone in a movie or in a TV show ever have anything happen to the president. Even in fiction this is a very disturbing thought. Could the White House be invaded?
So on the heels of this program comes the evidence that I heard on The Rachel Maddow Show of the blueprints of Marine I, the president's helicopter. They were leaked over the internet and guess where? They were leaked to Iran. It seems that terrorists watch the internet and steal whatever they can. How did they get these blueprints? Someone in the Defense Department used a social networking site for music and video sharing to send them to someone else. What??? Was he thinking at all??? So how safe are we all when morons like this send private classified documents over a public site????
Then it turns out that not two videotapes were made of the tortured prisoners, but 92!!! It doesn't matter, because they were erased, but really!!! And could we have become a dictatorship due to what Bush had in place? While my friends and I were protesting war and petitioning to keep our waterways and forests intact, the government was torturing people and finding ways to cut out all of our freedoms. It's much worse than any of us thought, and there was some pretty scary talk out there in the blogosphere. It makes me proud that I never believed the Bush government and protested the war and the 2004 election as well as working for voting rights. Everyone ridiculed me and said it wasn't so bad, but my friends and I never believed that was true. We knew something awful was going on and now that Obama is president it can all come out - the dirty laundry of the eight years of the Bush Administration piled up in front us.
I was going to highlight a blog today and will probably post again. It could be yours today.:) Until then, I've calmed down a little. Please leave your comments and I will try to answer them. Welcome to any new readers and thank you to the ones who are here awhile. This is still a work in progress.:)
Posted by Barbara Ehrentreu at 11:57 PM