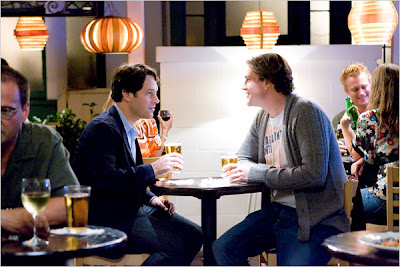 From "I Love You Man" - Paul Rudd and Jason Segal

Paul Rudd in "I Love You Man" 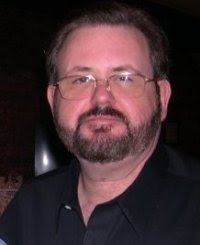 I needed a few days to relax after my author interview, but I'm back because so much has been happening around here.
First of all thank you to all the people who commented about Simon Rose's interview. There weren't many questions so I guess we answered everything you wanted to know about Simon Rose but were afraid to ask.:) Seriously, anyone who still has a question or would like to know more about Simon Rose please go to his website or his blog for information.
The next author I am hosting is Tim Hooker. Tim has three books published. Two of them were published a year ago. One is a book of short stories and the other has the unusual title of Duncan Hambeth Furniture King of the South. The short story book is titled Rocket Man. I am looking forward to learning more about Tim and his love of Tennessee where he lives. Look for the interview on Thursday, March 26th. :)
On Friday night I watched "The Great Buck Howard" on DirecTV HD1, which is a movie based loosely on the life of "The Amazing Kreskin". Anyone who remembers Kreskin from "The Tonight Show with Johnny Carson" knows what astounding feats Kreskin can perform. In the movie, "The Great Buck Howard" John Malkovich plays someone similar to Kreskin toward the end of his career. Starting with the focus on Colin Hanks, a disgusted law student who leaves law school after two years, the film shows how Hanks needs to find a job and answers an ad for an assistant road manager. Then we meet Malkovich as Buck Howard and we go into the world of the semi-failed performer. Buck Howard performs at Community theaters and has been doing this for awhile when Hanks joins as his assistant road manager. Unfortunately for Troy, Hanks' character's name, the road manager is fired and he has to take over for him. Malkovich plays the role of a washed up celebrity brilliantly and unless you compare them side by side it is a pretty good portrayal of Kreskin. In fact, on Kreskin's website they say: "Each scene in the movie has a dramatic similarity to the persona of The Amazing Kreskin." Buck Howard still knows how to wow audiences, but he isn't nice to his help. There is more, but you can read the reviews. My whole family enjoyed it and as Stephen Holden says: ..."it leaves a tiny but discernible afterglow." In fact, my husband looked up The Amazing Kreskin and we watched some of the video he did. If you watch the videos, you will see the prediction he made before 9/11. It gave me chills!!!

We did go to the movie theater on Saturday night and saw "I Love You Man" which picked up my spirits so much that I forgot how awful life has been lately.:) In the hands of the wrong director this would have been a light romp, but with Larry Levin and John Hamburg's great script and the crisp direction of the same John Hamburg all you need add is Paul Rudd and Jason Segal for a movie that may be the best comedy I've seen all year! Paul Rudd plays Peter Klaven, a man who always had women friends, who needs to find a best man for his wedding. He goes out on a series of "man-dates" looking for a man to be his friend. After many loser experiences he finds Jason Segal at one of his open houses to sell Lou Ferrigno's house. Segal seems like the perfect man friend and soon the two form a relaxed friendship. There is more and lots of mayhem, but that would spoil the movie for you. I urge you strongly to see this movie. It will definitely brighten up your day!!! Paul Rudd and Jason Segal are a fantastic pair and they should consider doing another movie together. :) And did I mention that Paul Rudd has amazing eyes!!
Today I went to the cemetery to visit my mother's and father's graves. As I stood in front of the cold stone rising above the trimmed bushes covering my parents' graves I had tears in my eyes. My brother, who came with me, and I are the only living relatives of our immediate family. My father is gone since 1972 and my mother since 1990. I hate going to cemeteries, because it reminds me of how ephemeral life is. Many of the graves that were added had been my father's friends. He and my mother are buried in a part of the cemetery reserved for his lodge members. I remember those guys as good natured men with mustaches who used to chuck me under the chin when I was a girl. It's difficult to see their names etched into the stone. My religion requires us to leave a rock on the grave to show we were there. The stone was empty when we came, but when we left each grave held rocks for each person's family. I'm glad I visited them today. Somehow I feel much more peaceful and I enjoyed hanging out with my brother. We don't get a chance to be together often and it was fun spending time with him and his wife.
After we visited the cemetery we went to a seafood restaurant my father would have liked and ate one of his favorite dishes, steamed clams. And then in kind of a memorial to him because he loved to drink the broth served with the clams after he was finished eating all of them, we each took a sip of the broth. My parents had always liked to go to Lundy's, a huge seafood restaurant

that went out of business and then started up again in recent years. Now this restaurant is undergoing another transformation. See the picture to see the whole building. To see more of what it looks like before it is redone go to this website where they have a series of pictures showing the restaurant. They're changing it into a huge gourmet market with a restaurant attached and calling it Cherry Hill. I'm sad to see the old restaurant go, but hope this new one will have great food. I don't go to Brooklyn a lot, so I'll probably have to make a specific trip to see it once it's done.
On the writing front I am all set to resubmit my first novel. I got great feedback from someone whose opinion I value and who is an editor herself, so all I need to do is write a great query letter and send the pages to this agent she said is accepting work from all authors. I'll let you know when I send it. It will probably be the early part of this week.:)
I am now a part of The Red River Writers blog tour and Tim Hooker will be my first author from there. He is really my second guest author as you know.:) After Tim I am talking with another author for the following week. I am hoping to interview someone every Thursday.
Finally, sorry to Marie and her wonderful blog for missing Postcard Friends Friday. I was so busy with my life and keeping up with answering comments on my blog. I will definitely post something this Friday.:)
Until the next time, thank you to all my readers and welcome to the new readers. Please leave a comment if you liked any part of this. Also, I am shamelessly asking you to click on the Google ads. I need the money!!! Anyway, a lot of them relate to writing.:) [You can disregard this if you feel it's too commercial!! For awhile they weren't even showing up.] Also one more thing, I will be highlighting another blog this week. It could be yours!!
Posted by Barbara Ehrentreu at 6:14 PM