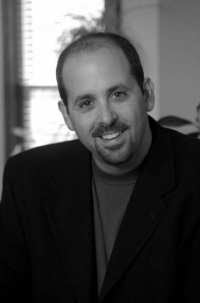 Today I am welcoming Eric Luper as our guest author. Eric has been the subject of an Examiner.com article and was recently my guest for April on Red River Writers Live Tales from the Pages. He is the author of three YA books, The Big Slick, Bug Boy, and his new book, Seth Baumgartner's Love Manifesto.
About Eric Luper
Eric Luper has lived in Albany, New York since 1999. Before that, he hopped from town to town depending on where he was going to school or working. As an English/Creative Writing major at Rutgers College, Eric tried to escape his literary destiny by going to chiropractic school. Soon he discovered that, although he made a great doctor, his heart was somehow wrapped around putting words onto paper. more

The following is basically the conversation Eric and I had Thursday, April 22nd on the Blog Talk Radio show, Red River Writers Live Tales from the Pages. Anyone who would like to hear our voices please tune in and listen to the archives.
The Interview with Eric Luper
Barbara: It says in your bio that you have lived in several places. You grew up in Springfield, NJ. Lived in Merrick, Long Island, New Brunswick, NJ and finally Albany, NY. Which was your favorite place to live and why?

Eric: There are good things and bad things about every place I’ve lived, but I’d have to say that location matters less to me than the people I associate with. I’ve been blessed with great friends and that can make even the most boring place interesting.

Barbara: What one thing changed your mind about just being a chiropractor?

Eric: Chiropractic care and writing occupy a different part of my brain. Likewise, they satisfy different hungers within me. I like doing both and cannot imagine what life might be like without writing.

Barbara: You came to writing late. What made you decide to become a full time writer? Did you have a mentor? Who was it?

Eric: Technically, I’m not a full-time writer since I still have my practice, but it’s likely I put in as many hours at the keyboard as a full-time writer. My mentor would have to be Mr. Frank Hodge. Frank used to own a children’s bookstore here in Albany NY. Not only did he give me a harsh dose of reality when I showed him my first stab at childrens’ writing, but he always put the right books in my hands to illustrate what he was trying to teach me.

Barbara: Did you start by writing short stories or novels? Are any of these early pieces published?

Eric: I wrote mostly short stories and one novella in college, but when I started writing in earnest it was novels all the way. Short stories are a tough sell and it’s nearly impossible to make a living writing short stories for childrens’ magazines. I do have a few articles published in Highlights and Weekly Reader though.

Barbara: How long did it take you to publish your first novel? Would you take us through the process?

Eric: After a five-year stretch of rejections, I started fresh and wrote BIG SLICK. The book took me around 5 months to write and a few more to polish and it was accepted on one of my first submissions. Farrar, Straus and Giroux was great through this process and we had the book edited and ready in a rather short time. The novel came out in 2007.

Barbara: Bug Boy is about the racing world and explores what it was like to be a jockey in the thirties. Why did you decide to write about this?

Eric: My eyes were opened to the topic when I read Seabiscuit by Laura Hillenbrand. During the Depression, children were sold into the horse trade. They were used and abused, many being beaten or traded from stable to stable like commodities. In researching the subject, I discovered that not much has changed over the decades when it came to the living and working conditions of track workers. BUG BOY quickly became a passion project; the research was maddeningly addictive.

Barbara: Seth Baumgartner’s Love Manifesto caught me and held me the whole way through the book. Did you base this character on anyone you know or maybe on yourself as a teen?

Eric: First of all, thank you. SETH BAUMGARTNER’S LOVE MANIFESTO is something of a departure for me and something I consider to be quite risky. The reception I’m getting for it has been quite encouraging. Humor is not an easy thing, especially when dealing with heavy subject matter. I think all of my characters represent a facet of me in one way or another, so, yes, Seth is partly me. However, he’s also partly someone else. But if you’re asking me if I’ve based him on anyone I know or used any real-life situation for the book, the answer is no.

Barbara: What is your writing process? Do you have a specific routine?

Eric: I tell people that I write between the raindrops. With two kids, a business, and working full-time, it’s rare for me to have blocks of time to write. The concept of a regular writing routine is unthinkable. Likewise, I tend to think on my story for long periods of time and then write in bursts of inspiration rather than trudging through a specific word count each day. I’m not an outliner and I find I make lots of wrong turns before I find the right one. But that’s okay; It’s just how I create.

Barbara: What was the reason you decided to have your first book signing for Bug Boy at Foxwoods Casino?

Eric: I love to support my independent bookstores, for sure, but I think it’s also important to find signing venues whaere you’ll find a higher concentration of people with interest in your subject matter. Foxwoods not only has the largest race betting parlor in the country (which was perfect for BUG BOY) but it’s also the home of the World Poker Tour poker room (which was perfect for BIG SLICK). And it was a wildly successful signing!

Barbara: Tell our listeners something that is not in your bio about you.

Eric: Gosh, that’s a hard one because I rewrite my bio so often. I’m not sure I ever mentioned that I spent 5 months traveling through Europe after college and spent a good amount of time volunteering on a reconstruction project at a medieval castle in the Loire Valley in southern France. I learned so much about history and masonry while I was there. It was fascinating.

Barbara: Do you have any plans for another novel? Who will publish it and when will it be published?

Eric: I have plans to keep writing as long as I can see my computer keyboard! After SETH BAUMGARTNER’S LOVE MANIFESTO, which releases on June 8th, I have a middle-grade novel coming. Currently, the title is JEREMY BENDER VS. THE CUPCAKE CADETS and it’s sort of Bosom Buddies meets the Girl Scouts. That one is slated for release sometime in 2011 with my current publisher Balzer + Bray (an imprint of Harper Collins).

Barbara: What are your plans for future book signings and book events? Please tell our listeners where and when they will be.

Eric: I had a book signing at the Hudson Children’s Book Festival on 5/1 in Hudson, NY. Check it out at www.hudsonchildrensbookfestival.com. (Unfortunately this is coming out after the weekend.)

I also have a signing coming up at Book Expo America (BEA) on Thursday, 5/27 at 10:30am. I’ll be signing hardcover copies of SETH BAUMGARTNER’S LOVE MANIFESTO. I can’t wait for that one!

Then, the official release of SETH BAUMGARTNER’S LOVE MANIFESTO will be at The Book House of Stuyvesant Plaza here in Albany on Saturday 6/12 from 3 to 5pm. I’m doing a dual signing that day with author and friend, Coleen Paratore, who will be signing a few of her books as well!

Be sure to check my website (www.ericluper.com) or my Facebook page for any additional information. I’m usually pretty good at updating things and announcing things.
Thank you for visiting Eric. Anyone who would like to ask Eric a question please leave your comment here. Eric will be available to answer your questions through the weekend. Anyone who leaves a comment or question will be in the drawing for an ARC of Seth Baumgartner's Love Manifesto. Of course Eric and/or I will respond to your comment too.:)
Until the next time, thank you to my readers and welcome to my new readers! Since April is over I am no longer writing a poem a day, but I will be writing a poem a week on Wednesdays. I haven't decided if I am going to post those or not. My thanks to everyone who commented and helped me to choose the 5 poems to send for submission. Here they are:
Empty
Memories
Pochahontas
Self – Portrait
Letting Go
Wish me luck! I am up against so many talented poets that I don't think I have a chance.:)
Posted by Barbara Ehrentreu at 10:22 PM