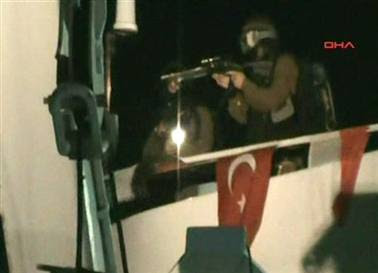 An Israeli soldier trains his gun on the aid ship

Stop at the railing to wonder why a woman
peers down at the mud flats to examine
what she is observing and see the scene
that in one moment melts your heart and heals you.

See their fluffy brown feathered bodies tiny as pebbles
as they stay close to their mother, a pristine white long
necked black billed swan. Watch as they waddle onto the mud
Mother never looking back, but aware of the two balls of fluff behind her

Watch their journey as they march in line toward the
wide expanse of this finger of Long Island Sound
As proud mother swan moves them ever so slow
looking straight ahead, yet always aware of her two babies

Continue watching as she reaches the water and they tumble into it,
Their tiny bodies already able to glide along with their mother
Seeing at one point they feel more confident and duck under
splashing with the abandon of the innocent.
copyright 2010 by Barbara Ehrentreu


Until the next time thank you to my readers and to any new readers. We are getting closer to finding out the cause of my husband's hypercalcemia and will see the doctor tomorrow.
Posted by Barbara Ehrentreu at 7:37 PM