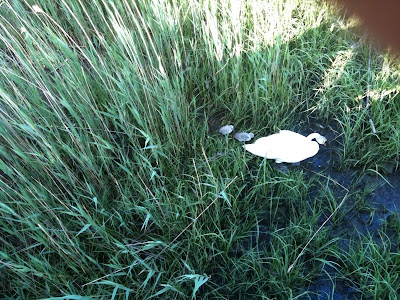 Unfortunately, since my last post my life has heated up a little. My husband's hypercalcemia has gotten worse. The last time he went to the doctor we thought that there would be an end to this frustration. The doctor prescribed prednisone. With a diabetic this means that you have to check your blood sugar four times a day and if the reading is 250 or more you have to take Novalog with your insulin. My husband took the prednisone for the first time and the first night his blood sugar went up. So he had to inject himself with the Novalog. The next day the same thing happened. But the next morning he woke up strange and weird. My daughter tried to stop him from laying out his week's medicines, because he didn't seem to know what he was doing. I tried to get him to take his blood sugar so we would know if he needed the Novalog. But he wouldn't do it, so we had to hold him to get it taken. It wasn't at the high number so that was good. But he was very angry and we thought that maybe he needed to be in the hospital again. I was going to take him like I did the last time, but he wouldn't budge. We had to call 911 to get him to the hospital. But then they came and he treated us like criminals telling the EMT's that we had attacked him. So the EMT told my husband, a criminal lawyer, that the police wouldn't press charges if he went to the hospital. Then we had to be questioned by the police!!! I knew that my husband was definitely not in his right mind.

When we got to the hospital I realized that the hospital didn't have his records so I had them transferred. When they decided to admit him the doctor told me that it would be better if he went back to his original hospital. So they sent him there and we had to pay for it!! We got to the original hospital a few hours later and he was already in his room, but he was very agitated. However, the doctor came in and told us that what they found was my husband had prednisone psychosis. It's ironic that the drug they tried to bring down his calcium contributed to him being psychotic.:) He had no idea where he was and barely knew us, but then he seemed a little better. But around 11aPM he called to complain. Then when I called the nurse after he called a second time they said that he was getting what he wanted. I didn't think anything about that until the next morning when I realized when he called in the morning that he was saying gibberish. When I called the nurse's station they told me he was very agitated overnight and tried to get up though he was weak. He did it enough times that they had to move him to a room that had a bed alarm! Also he had to have a nurse watching him 24/7 and if he tried to get up the alarm would go off and she would go in there to help him. To my husband he thought that he was in a prison. So when I called him he said he was in prison and was very angry that we had put him there. We tried to tell him he was in the hospital, but the craziness wouldn't let him believe that. The nurses told us that he was so loud and crazy that they had to give him haldol. This distressed me so I called the doctor and he suggested that we wait until evening to see him. Last night he was still unable to tell us where he was with conviction. But he was able to sleep through the night as best as anyone can in a hospital. This last visit this afternoon lasted through the evening and we saw him eat finally!!! Last night all he wanted was ice cream and pudding. But tonight he ate almost all of his dinner! The calcium level which is supposed to be 10.3 was at 11.4. I found out that when he came into the hospital it was 14,3! So this combined with the prednisone to create this psychosis. The good thing is that it is temporary.

So where are we now? The doctors are really stumped. So he will be sent to Massachusetts General where he will meet with the doctor who is the country's best expert on hypercalcemia. That is in Boston and we have no idea when he will be able to go there. Probably he will be a subject for The New England Journal of Medicine.


Where does the hope come in here? Yesterday when we got back from visiting him in the afternoon and after my dental appointment where I had to undergo a cleaning that was very intensive, I needed to have time alone. So I went for a walk along the path near our place that also has a boardwalk. As I walked along I saw a woman who was looking at the mud flats and decided to check out what she was watching. The pictures that follow here are what she saw. When I saw this I took it as a sign that there was hope after all and that my husband was going to get better. The woman actually filled me in on all the information. But all I heard was Hope!!! 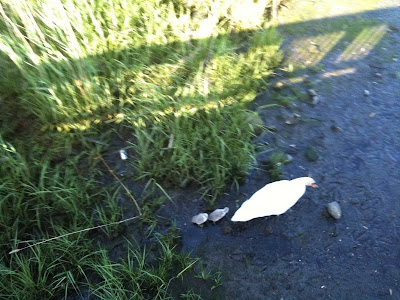 The mother swan brings her babies for a swim. They were born last Friday. 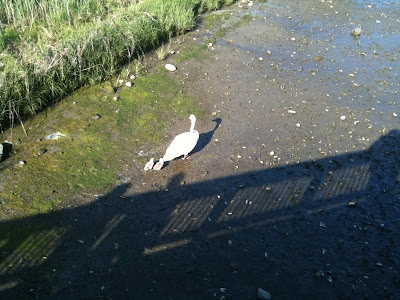 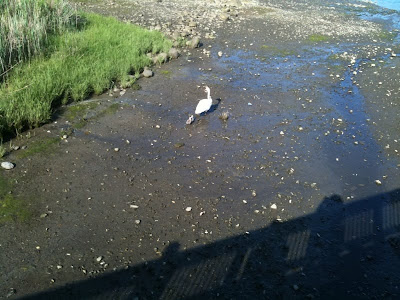 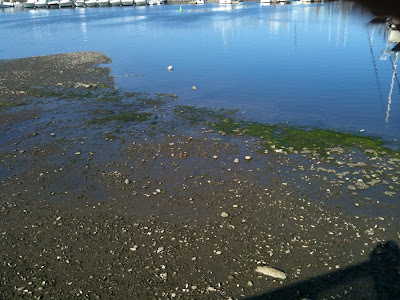 They finally arrive at the water. You can't see them too well, but they are frolicking!

Until the next time, thank you to my new readers and to those readers who have been here for awhile. This week is the week for my radio show, Red River Writers Live Tales from the Pages and I will be having as my guest, Fran Lewis. She is a really good friend from my teaching days who has become a children's writer. She also has a few books published on the subject of Alzheimer's. Tune in on Thursday, May 27th at 3PM Central Time to hear my guest and myself with my co-host Freda Roberts talk about Fran's books. Her picture books address issues that are very common in school. They are: My Name is Bertha, Bertha Speaks Out, Bertha Fights Back.

For everyone who is praying for my husband, please keep your prayers coming. I really appreciate all my friends who have kept me going during this stressful time. Thank you so much.

Posted by Barbara Ehrentreu at 10:01 PM