Theater under the Trees at Woodstock Fringe

A Festival of Theater & Song 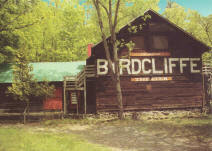