OMG What a Week! Postcard Friendship Friday Too! 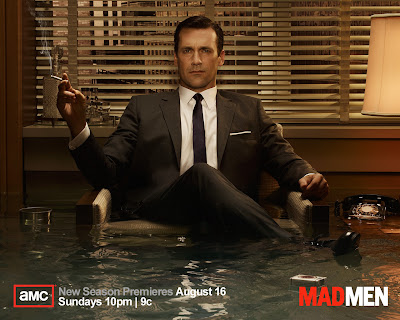 Okay, this is definitely not a postcard, but you can download it yourself from the website and have your own Don Draper staring at you from your desktop like I do now. I'm considering it a postcard, because he's definitely saying hello with his eyes. :) This is one picture I could keep looking at every day.:) The only problem is since it's vintage there is a cigarette in his right hand. But that is a mere period detail. As I remember from my childhood and teenage years everyone smoked including myself. I wonder how anyone could breathe.
Speaking of smoking, there was such a cachet about it. Anyway, the first episode of the third season of Mad Men comes on next Sunday and I am so excited. If you haven't seen any of the first two seasons I would definitely buy the DVD and cram it all in before Sunday. This is such a great show that manages to convey the feelings and environment of the early '60s. It is like an Xray into the lives of the people I always thought had a great life.
I'll never forget when I was looking for a summer job after my freshman year in college I went to some of these ad agencies to get a job. The carpet was plush and the walls were wood paneled. The furniture was comfortable. The waiting room was better looking than any living room I'd ever seen.:) If only I could have lied better I might have gotten the job, but I could never say with a straight face that I wasn't going back to school in the fall. I spent a lot of hot days walking the Manhattan pavement in three inch heels and then I had to go home to Queens on a hot subway train filled with sweaty miserable workers. They didn't have air conditioned trains yet and let me tell you it was like being in a moving gym. Yuck. I gave up and took a job in a camp where there was fresh air and I could be out of the city.:)
Anyway, getting back to Mad Men, the guy in the picture, Don Draper, is my idea of a perfect postcard. So I present that to you.:) Sorry to the guys out there who would rather I had put the female character up there. I think you can find the curvy one, Joan, at the website too.:) Enjoy and don't forget to grab your own screen saver at the Mad Men website. Also while you're there you can make an avatar of yourself as you might look as a Mad Men character. Here is mine. Notice that I have a coffee mug instead of a cocktail glass in my hand. That is because I thought the background was going to be an office. It's hard to see what the background is when you're doing it. But I like that, because it makes me look so innocent and that's just what I was around that time. I was a pretty late bloomer.:)
I never had a dress like that and my hair wasn't blonde, but other than that not a bad look don't you think? I really like the pointy eyeglasses and the neat red handbag too.:) 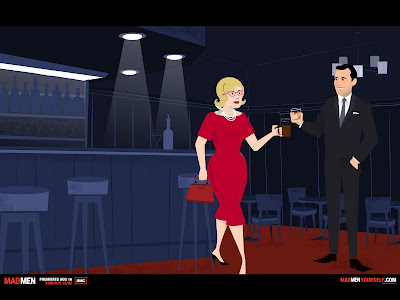