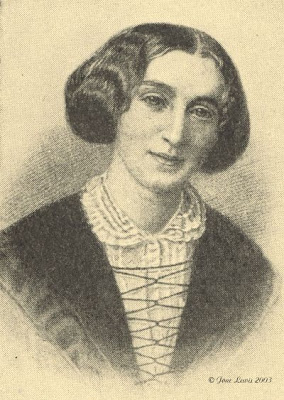 George Eliot 19th Century Woman Writer
"from a painting by D'Albert-Durade,
made when the novelist was thirty years of age

"Yes! Thank God; human feeling is like the mighty rivers that bless the earth; it does not wait for beauty—it flows with resistless force, and brings beauty with it."
---George Elliot, Adam Bede

This is for all the women writers I know. Pam of Teratali Reiki and Counseling, this is for you too. This is also for the Women's Blogger Directory of which I am a part. We are women hear us roar!!!!

Today I am posting a quote I recently saw that expressed how I feel about expressing feelings. As you can see, it comes from a writer from the nineteenth century. She was a brave forerunner for the women who are now commonplace as authors. Yet at the time she wrote it was highly unusual for women to be well known authors. She lived from 1821-1881 and during that time she constantly challenged the accepted mores for time in which she lived. In this biographical information we can see why she might have written this about feelings.
Unfortunately, George Elliot whose real name was Mary Ann Evans/Marion Evans, was unable to write under her own name. In fact there was a controversy over her first novel, Adam Bede. Impostors tried to take credit for it. When it was revealed that she had written the book all was solved.
There is more about this fascinating author, but I have to get to my guest author. So that is all for this post. Please see the following post to learn about Cynthia Polansky and her writing.
In the meantime, I'm so glad that people like George Elliot came before us and women no longer have to disguise their own identities to publish major works. I don't think she has been paid enough attention by modern writers. I do remember reading Silas Marner in high school and not really appreciating it. If I had known that George Elliot was really a woman I wonder how much more interest I would have had in it.:) Come to think of it my teacher never told us it was written by a woman or else it just didn't sink in, which is probably because I was so bored and didn't pay attention.:)
Posted by Barbara Ehrentreu at 1:39 AM