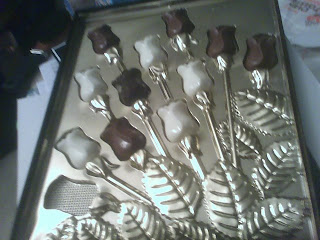 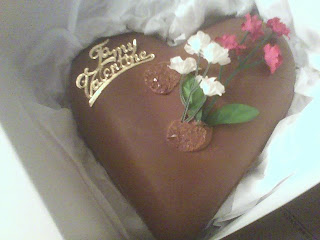 I really hope that all of you had a wonderful Valentine's Day. My husband came through and bought me a bouquet of handmade chocolate roses. He says that he'd much rather not see flowers die gradually. He also bought me and my daughters a giant milk chocolate heart. It had two covered small chocolate hearts that were eaten so that's what those holes are.:) It's so beautiful I don't want to eat it. You can see one of the roses is eaten and it was delicious. There is this place in Briarcliff Manor, NY called The Chocolate Chalet where they still make chocolate by hand and they do such amazing work. I found it when we needed to get candy and they had these awesome constructions all made of chocolate. This place even has little boxes for nurses and doctors with chocolate stethoscopes and nurse's caps. They have a chocolate piece for almost every occupation and the taste and texture of this chocolate is so yummy. I wish I could give all of you a taste. You can order the chocolate to pick up. I don't know if they ship it, but give them a call and see if they will do it. These are the nicest people and even if you can't get there take a look at their website to see everything they make.
Usually, he buys flowers and occasionally he'll go out of his way and buy a really unusual chocolate. Like the year he bought us all Jacques Torres chocolates because he was in Brooklyn near his store. They were incredible. But the bouquets of roses he buys are also gorgeous. However, this year he didn't want to watch the flowers die, so he got the chocolate. I'd rather have the chocolate, because it lasts longer than the flowers and it's not so sad when it's gone.:)
The best thing though is that he buys me and my daughters a present every Valentine's Day even though he doesn't believe in it at all! He says it's a holiday made up by the greeting card people to get business. With all the e-cards, though, I haven't gotten many greeting cards at all lately. I sent out e-valentines to my friends and one to my husband. I think it's a greener way of saying you like or love someone than a real card. Also no mess and wondering what to do with it when it's finished. Can you throw away a Valentine card? Yet we delete cards all the time on the computer.
So with such a romantic start to my day I thought we might have a romantic evening. Well we went out to dinner to a place close to us and decided we'd go to the movies afterward. There aren't too many movies out that are appropriate for Valentine's Day, but my husband didn't care. You know what his idea of a fun movie to see on Valentine's Day was? "Waltz with Bashir", the story of a war crime that has not been publicized and took place in the 1980's in the Palestinian refugee towns of Shatila and Sabra in Lebanon, actually a massacre. I won't say more about it now, because it would be better if you go see it, not to know what it is about. Also, it's really a very well done cartoon with some live action. If you you've seen "A Waking Life" it reminded me a lot of that film which is also animated. The movie is hypnotic between the sound of Hebrew and the lullaby-like music in the background I could barely keep my eyes open during some scenes. If you are wondering why it is so difficult to achieve peace between Israel and Palestine and why they fight so vehemently over Gaza, this film will help you to understand  how the Palestinians feel. I know it crystallized a lot of the thoughts I had about this conflict.
Again, I will highlight a new blog tomorrow. I know I said that in my last blog, but I'm serious.:) Until then, thank you to my new readers and have a great weekend. Here it's going to be President's Day on Monday when we celebrate George Washington's Birthday. It seems fitting that they finally passed the stimulus bill and President Obama is going to sign it on Tuesday. Yay!
Posted by Barbara Ehrentreu at 1:48 AM