As promised the real photo of the real soup! 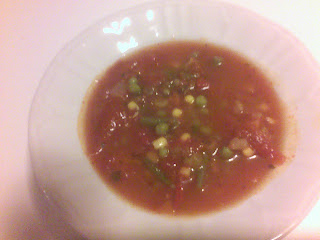 I found a way to show you my soup. I don't know why I didn't think of it last night, but then again, I don't think well late at night. It's funny that I can write well at that time, but thinking and doing, not so much.:) I decided to take a picture of the soup in a bowl- with my phone. :)
Finally, here it is and by the way. Wish you could have had some.:)

Take a big virtual slurp of this soup. To steal the Campbell's slogan: "Hmmm hmmm good!".

So I finally got to see one of the movies I wanted to see last weekend, "The Wrestler" and everyone should see it. Mickey Rourke is amazing in it and so are Marisa Tomei and Evan Rachel Wood. Darren Aronofsky did a fantastic job of directing, because he directed both men and women well. There are some scenes in here that would be killed by a bad director or bad acting. Everything works together and creates a great movie. The scene is set in the beginning when you learn about the main character and his amazing wrestling career. But the story gives you a peek into the actual wrestling world and how they support each other. If you wanted to learn about wrestling this is the film for you. I won't lie and say everything works out okay in the end and then again, I won't spoil it for you and tell you the ending. You know how I hate that!!! But after the ending listen for the Bruce Springsteen song, "The Wrestler" which he wrote especially for the movie. It's very powerful. Yet as most Springsteen songs are, hummable.:)

Mickey Rourke's performance is so nitty-gritty you'd swear he was a professional wrestler. It's honest and somehow dignified. Rourke even has a few semi-comedic moments here too. And he really is buff for a man his age.

One film down and three left on my must see list: The Wrestler - Seen
Slumdog Millionaire
Doubt
The Reader

Of course, besides these I have a couple that aren't going to be blockbusters, but they are the kind of movies I like. They're either romantic comedies or they're exceptional in some way. So add: He's Not That Into You
Che
For Keeps

So I'll try to see those too. But getting back to The Wrestler the acting was so good and if you didn't know this, Mickey Rourke did his own stunts. When you see the movie you're going to say no way is that right, but it's true. Also a lot of real wrestlers took part in the making of this movie either in front of or behind the scenes. It's very authentic.

I'm skipping the weekend for highlighting blogs, but will return to this on Monday. Hope everyone is having a great weekend. I'm feeling almost like a new person with my hair done. I'll try to get the pics of me in my new hairdo for you. My daughters and I crazily stood outside in the frozen sunshine to take some pictures and then we retreated into the warmth of our still running car.:) By that time, though my hair was so windblown I'm not sure it looked good in any pictures.:)

Off to read more blogs. Nothing about politics today. I'm so shell-shocked from recent news so I'll digest it and be back on Monday. Well, one quick response to Obama's new shirtsleeves policy. If everyone thinks about it, when you get to work don't you take off your jacket and work in your shirtsleeves? I think the reason Bush wouldn't let people take off their jackets is that he didn't want any real work done.LOL. It's time we concentrated on getting work done rather than keeping up a formal and ridiculous for this century, dress code. Change is here!!!!!
Posted by Barbara Ehrentreu at 3:24 PM