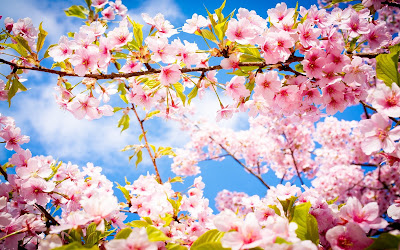 I didn't think I could do it, but I was able to write 60 poems for April!!! The ones I am posting here were done for Poetic Asides and they are posted there for anyone to see in the comments for each day. The others were done for World Poetry Open Mic and they are posted on their website on Facebook for each day. I hope you have enjoyed reading these. I just finished writing them today.
I can't believe April is over and it really doesn't feel like May at all with 50 degree days and rain. Hoping the sun will come out soon.


April 23
Prompt: Write a poem about footwear, any kind

They were my favorite shoes
the sides were formed with string
wound around them
with red cotton uppers that let
your toes peek out from a hole
platform shoes that felt as light
as wearing no shoes and for me
this was such a rare occurrence
they hold a special place in my memory
my red espadrilles worn without socks
or stockings with bare legs
newly shaven and nails freshly painted
so the toes that peeked out sported
reds or corals each time
love is a small word for how I felt
about those gorgeous, sexy shoes
and I would have them today except
for a puppy mishap when he decided
these would make a great chew toy
and gnawed off most of the string
leaving the luscious red espadrilles
as if a war had been fought on them

such a predicament since my newfie, Flash,
when I confronted him with the deed
looked at me with puppy eyes
and really, who could be angry
with a sweet, black ball of fuzz
who came at me and licked me
every chance he could get
and really wasn’t it my fault for leaving
them out and not cherishing them
as I should have done
and I forgave him for the deed
petting his head and scratching him
under the chin — no reprimand from me
though my heart was broken for I had lost
my brilliant red espadrilles and besides
when we moved I never did find the other one.
Shoes are shoes, but a dog like Flash
was a treasure and he lasted a lot longer
than those espadrilles.
copyright 2016 by Barbara Ehrentreu

April 24
Prompt: Write about something that is lost and has been regained

April 25
Prompt: Write a poem about exercise or about an exercise machine

Like anything else exercise when
thought about too much
becomes a chore you push to the side
like washing the dishes — if you think too much
the pile will appear to be a mountain
too high to climb
but climb you must and
you roll up your sleeves and begin
to wash one plate or one pan after another
and you don’t dare think of exercise
for it will stay just a thought
if you don’t begin the routine
where you find your clothes and put them on
then the task becomes doable
and you stop thinking
your mind is on auto drive as you
gather the things you will need,
your IPad, water, remember to put on
your sneakers and you are ready
not thinking you walk down the hall,
convenient, and find your machine,
the one you always use
familiar and comforting,
like a well worn easy chair
your legs pump up and down
as you get into the rhythm of the workout
and you don’t think about
what your body is doing, because it is automatic
up and down your legs go and your arms go back
and forth holding the handles and pushing your
body to move faster and faster or going against
the pressure of increased tension or height
not really thinking as your body absorbs the
activity and you move in a practiced motion
up and down your legs go and back and forth
your arms go as you move and move
ignoring the wetness on your face and pushing
your body to its outer limits
until the machine ends and you realize
you have spent almost an hour exercising
how much fun to fool your brain.
copyright 2016 by Barbara Ehrentreu

April 26
Prompt:  Write a love poem and/or an anti-love poem

The Seeds of Your Love

April 27
Prompt: Write a poem about a take off, maybe from work or taking off in an airplane, etc.

Today I had to take off from work, from my daily life
my mind is whirling as I remember the day
two years ago to the moment when I lost him
a loss so devastating it turned my world upside down
the down remaining for months as an empty space
the place where he belonged a void now
and this was where it stayed until
time paved over the pain and it lay there
beneath the surface like the molten magma
waits patiently beneath the earth’s crust
churning and boiling and awaiting the crack
then today on the second anniversary of his passing
a crack opened and the sadness poured out
covering all like the lava of an open volcanic eruption
and caused my mind to sleep under the volume
of the immense feeling that had laid beneath the
surface as my life went about its ways
time to take off from everything and instead
sift through the rubble of my remembrances.
copyright by Barbara Ehrentreu

How do we know what is important
as our life sifts through each day
the moments pass by too quickly
some seeming so slight
and yet on second thought
those small moments
appear as gems in our life
not big ones like graduations or births
these are momentous and celebrated
but what of the times your eyes met
and you knew you had someone who
loved you across the room
or when you spent the day on the sofa
dozing and watching a baseball game
with the one you loved by your side
or the many times you held his hand
and felt the joy of belonging with him
or the countless moments of bliss
you never counted as the days passed
were these important
and did you let them slip by as
you walked through life like raindrops
falling on you and not knowing which
one will cause your eyes to close
with the splash. Unimportant moments
that splashed you with a tiny drip at the
time.
copyright 2016 by Barbara Ehrentreu

April 29
Prompt: Write a haphazard poem, about a haphazard situation or the way the poem is formed

Then it changed and became a siren wail
and I found her between the mangled bikes
my wild will o the wisp child on the
cold cement of the sloped driveway
a melange of legs and bodies beneath
the pile of bicycles
wrenching her from between her
only way to fly through the neighborhood
now lost as she limped from the scene,
I never realized this was the time
she would place in her book of memories
paste the joy of riding down hills and
gliding around with ease on her bike
into the scrapbook of her life
for her this was the close to childhood
her cul de sac, her dead end
copyright 2016 by Barbara Ehrentreu

Until the next time, my next guest author will be Judy Alter on May 16, 2016. She is the author of The Gilded Cage, which is all about Chicago during the early days of the city. She will also be a guest on my radio show in August.

Also, for anyone who didn't know this, my poem won an award in the Nassau County Poet Laureate's Society Annual Poetry Contest and I will be accepting that award on Saturday, May 14. I will be posting the poem soon.

In some ways I am sad April is over. Spending so much time on poetry was a lot of fun. I hope all of you were able to either write or read as much poetry as you could during the month. But don't give it up because April is over. I love the spring, because it inspires me to write all the time!

Posted by Barbara Ehrentreu at 1:22 AM