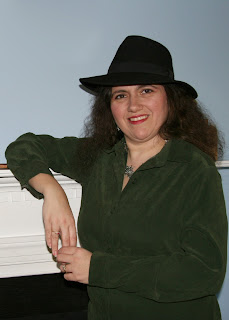 I am very happy to be part of Karina Fabian's Greater Treasures Tour today. This is in honor of her releasing her new book, Greater Treasures part of A Dragon Eye series. Once more we learn of the activities of her main character, the wily dragon, Vern.

Thank you for coming today, Karina. I am thrilled to be part of your new book tour. Would you please tell us about your book and a few things about the characters?

Even Fictional Characters Have Joys and Sorrows

Thanks for hosting me today, Barbara, and giving me a chance to talk about my latest adventure, Greater Treasures.  Greater Treasures is a novelette in my DragonEye universe.   This is my favorite universe to write in, and for one reason:  variety.

The DragonEye Case Files started as a single short story, a kind of parody of noir detective films.  Vern is a cynical dragon working as a private investigator “on the wrong side of the tracks,” i.e., our world.  I only intended it as a one-time thing, but I fell in love with the character’s voice.  Vern could be snarky and cynical, yet pull off puns and alliteration, make wisecracks…all the stuff I love to do and read.  So more stories begged to be written in his voice.

Perhaps because I started with humorous noir and thus had a foot in both worlds, the stories branched into each genre.  The two novels, Magic, Mensa ,and Mayhem and Live and Let Fly, are comical, sometimes even slapstick.  Readers have told me to issue a warning that no one should eat or drink while reading them, and if laughing in public embarrasses them, read in privacy.  I love that Vern elicits such mirth.  Further, I enjoy how the juxtaposition of magic and technology allows me to play on the clichés and follies of both.

However, not all stories lend themselves to humor.  Greater Treasures is one of them.  This is a grim tale; Vern gets desperate and angry; his best friend’s life is in danger; and he’s put in the most terrible of positions—having to decide between the “right” thing and Grace’s life.  He still snarks and tells jokes, but there’s an edge to them.  Definitely a “safe” book to read on the subway if giggling in public embarrasses you.

Common wisdom might say that I should pick—stay funny or stay noir—but I love that the characters and world are real enough  to show me their tragedy as well as their comedy.  I hope that you, as readers, will enjoy that, too, because Vern has many more tales to tell and many more cases to solve.  We’d like to share them, funny and gripping, with you.

Karina, thank you for sharing your insights about your character and I agree that whatever works for your character has to be written no matter if they fit the mold or not.:)

Here is more on Greater Treasures:

Tag line: When Grace’s life is in danger, Vern will do just about anything to find a cure—but will he sacrifice the fate of two worlds for her life? #dragoneye http://tinyurl.com/greatertreasureskindle

Blurb:  Being a private detective in the border town of the Faerie and Mundane worlds isn’t easy, even for a dragon like Vern.   Still, finding the wayward brother of a teary damsel in distress shouldn’t have gotten so dangerous.  When his partner, Sister Grace, gets poisoned by a dart meant for him, Vern offers to find an artifact in exchange for a cure.  However, this is no ordinary trinket—with a little magic power, it could control all of mankind.  Can Vern find the artifact, and will he sacrifice the fate of two worlds for the life of his best friend?

Link: http://tinyurl.com/greatertreasureskindle  Will get the print link to you as soon as the book goes live on Amazon.  It should be in a day or two, but you never know.
Categories:  fantasy, fantasy mystery, paranormal, urban fantasy, noir

Excerpt:
Given the day I was having, it came as no surprise that when I got home, I found the dogs sprawled in a drugged sleep and the sounds of things being overturned from within the warehouse. I decided not to bother with subtlety, but I did resist the urge to burst in with flames going full-blast. I had questions first.
Naturally, I walked straight in to find an automatic weapon—yep, a bona fide black-market AK-47—and I thought only Faerie lived their clichés—and six other weapons of various types pointed at me. I didn't stop, just closed the door with my tail while I strolled in slow and placid-like. My visitors had shaved heads, faces painted white with clown paint, and black t-shirts with swastikas in white circles.
"If you're the housekeeping service, you're fired."
"You stay right there, or we gonna fire you!" said one guy from the sidelines as he held his nunchucks at the ready.
What'd he think he would do—whack me on the nose? I turned to the one holding the assault rifle. "Scraping the bottom of the barrel with that one, weren't you?"
"He's right. You just stay still while we search the place."
"The place" was a ten-thousand square foot warehouse with offices on the upper floor. Boxes I still hadn't opened line the walls and made a maze in the second warehouse room. I settled myself on the floor and rested my head on my crossed arms. "Go ahead. I get half of anything you find."
They stared at me, unbelieving. I smiled back. Mr. Cooperation, that's me. Finally, Big Gun snarled for the others to get to work. As he turned his back on me, Nunchucks muttered, "I got your half. Don't think I don't." Guess he learned such witty repartee in Hitler Youth Summer Camp.
I watched and listened and waited. With eight teenage skinheads trashing my place, it was only a matter of time.
"I wouldn't go in there if I were you," I suggested as Nunchucks made a grab for the doorknob to Grace's workshop.
"You gonna stop me?" He turned the knob.
"Nope," I said as I closed my ears and my eyes. Even so, I saw the otherworldly light and heard the harmonious roar of Divine Vengeance followed by Mundane screams.
"The Heavenly Host on the other hand…"
I waited until the screams died down to whimpers before opening my eyes and rising.
Four of the skinheads were unconscious. Three may as well have been; they were curled up in the fetal position, whimpering. Nunchucks was actually crying for his mommy. Big Guns had collapsed to the floor as well, the gun thrown away from him. He was sitting and rocking and making high-pitched keening through the roof of his mouth.
I'd tell Grace to tone down her wards some, except that the effect is directly proportional to the evilness of the intent. Suddenly, I was feeling a little shaky about my earlier entrance.
Knights out of the armor now. I went around, collecting weapons in the office trash can and poking through pockets. I found the usual stuff—driver's licenses, credit cards, petty cash… One kid had a condom; wishful thinking on his part, I knew. Another had a report card. MLK High. Wonder if he was the one beating up Faerie kids? Honor roll grades, too. Of all the years I've battled evil, there were still some things I didn't understand.
As I was returning Big Guns' (aka Rick Matherston's) wallet back into his jacket pocket, he blinked and focused on me.
"What was that?"
"Angels, kid." Actually a kind of magical shadow of the real thing, but close enough.
"But I thought angels were—"
"There's a reason why their first words are usually 'Fear not!' whenever they meet a human."
His eyes returned to their unfocused stare. I almost felt sorry for him. Then I noticed the letters FARISLAR tattooed on his knuckles. Faerie slayer.

About Greater Treasures:  Most people associate the DragonEye stories with high humor ranging from puns to slapstick, and in fact, the first stories and the novels have certainly been crazy fun.  But the life of a cynical dragon PI isn’t all laughs, and Vern has had a few chilling stories to tell me.  Some of these, I’ve sold to anthologies, but some are too long for that.  Thus, I’ve decided to start publishing them on my own.

One thing I like to do for DragonEye stories is watch old noir films.  Greater Treasures came to me while watching the Maltese Falcon.  If you’ve never seen it, I recommend it.  (Then, reread the story to see if you catch the in jokes.)  I needed something with more “oomph” than a bird statue, and since Vern has some history with the Lanceof Longinus, it made a good fit.  I enjoyed looking up all the conspiracy theories about the use of the Lance by Hitler, which is where the neo-Nazi angle came in.  To say more would be spoilers, so please, enjoy the story.

And if you do, be sure to check out Vern’s other tales at http://dragoneyepi.net.
Bio:

Winner of the 2010 INDIE for best Fantasy (Magic, Mensa and Mayhem), Karina Fabian has imagination that takes quirky twists that keep her--and her fans--amused. Nuns working in space, a down-and-out Faerie dragon working off a geas from St. George, zombie exterminators—there’s always a surprise in Fabian’s worlds. Mrs. Fabian teaches writing and book marketing seminars, but mostly is concerned with supporting her husband, Rob Fabian as he makes the exciting leap from military officer to civilian executive, getting her kids through high school and college, and surviving daily circuit torture…er, circuit training.  Read about her adventures at http://fabianspace.comhttp://dragoneyepi.net..

Well I know I learned a lot about your new book and I'm hoping to get to read it soon. Here are all of Karina's links:

So nice to have hosted you today and I hope that many of my readers will want to read about Vern. His choice has me wondering what he will do.

If you want to keep track of the Greater Treasures Book tour:

Until the next time I will be hosting Heather Greenis on May 23 and Sarah-Jane Lehoux on May 30.

I will also try to post all the poems I wrote for April Poem A Day. I did not finish the month, since my life became way too busy.

One more thing, for all who are waiting for my next book, I am going to send it out very soon. I am only waiting for my daughter to read it, because she always has valuable information to give to me. I will keep everyone posted about it. I may just send it for Poeming Friends SAD. If you are part of this group you know what that means. If not, it means that we have decided that May is the month where we are all going to try to submit our poems or anything once a day. I'm not likely to do that more than once a week, but I'm going to try.:)


Posted by Barbara Ehrentreu at 4:32 PM