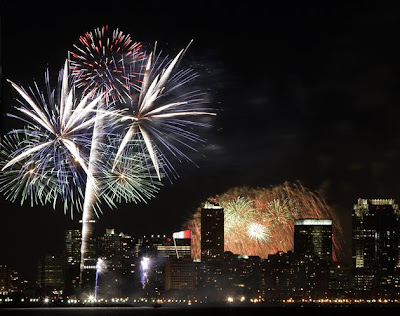 Where did you spend your 4th of July? If you are an American this is probably the one holiday that most people spend either at the beach or at a barbecue. For years my family went to family barbecues. Some were a little more elaborate than others, but they were always at someone's home. Occasionally, we'd go to the beach to view fireworks up close. But many times we watched them on TV. When we lived in Kew Gardens, Queens we used to go up to the roof of the highest building there, the parking garage and we'd see them in the distance when the kids were young. Afterward we'd come home to our neighborhood of apartment houses to find the place exploding with firecrackers and small fireworks. It was exciting and slightly dangerous. You could smell the fireworks in the air there were so many!
But last year and again this year, we spent the evening of the 4th of July at Trump's Golf Course in a secret location in Westchester as the guests of a relative who is a member. There is nothing to compare with this experience of being with hundreds of people at this sumptuous place.:) There is an entire roomful of food of all kinds and of course, barbecue items as well. You could get the hamburger or hot dog and the potato salad and cole slaw, but inside were Asian foods like egg rolls and lo mein and a salad station where you could get your salad custom made. My favorite station was the giant table of cooked shrimp piled high on blocks of ice. Add to this two chocolate fountains where you could dip pieces of cake, marshmallows, pretzels, fruit and also create your own S'mores with the graham crackers they had there too. Also pastries like bite-sized eclairs and napoleons, the classic apple, cherry, and blueberry pies, cheesecake, cookies and outside a person making cotton candy and a fresh-popped popcorn cart. The place was filled with kids and before we came there was stuff like those bouncy houses and the usual kid fun. The whole atmosphere was relaxed and even homey with all of the things I just described. It was like going to a really casual wedding in someone's backyard that happened to look like Trump's Golf Course!:)
But the best part of the evening were the fireworks! They started out with a heart!! Each set was accompanied by a song and they were really well suited to the fireworks. You are so close to them that you feel they are going to explode on top of you. This year we viewed them from the balcony. Last year we sat on a wall near the golf course and it was truly mind blowing to watch fireworks like that. We'd seen them on the beach, but these were even closer to us!! For a full half hour I felt like I was a child and I'm sure I had my mouth open as I held my hands together in awe of the amazing display above me. My daughters were standing and they said you could see part of the Macy's fireworks in the distance as ours were being displayed.
When we got home we watched the Macy's fireworks which we had Tivo'd. They were also amazing and if you read my first post today I said I was going to see them. They were so good I have the video here so you can see part of them if you didn't see them. Ours at Trump's were as good, but we only had one column of them. The Macy's fireworks are amazing too, because there is such a large expanse of them. This year they returned them to the Hudson River, because it is the 400th Anniversary of Henry Hudson's voyage up the Hudson River.
I was looking for great photos of the fireworks and found a blog called "Culture Mob" where you can see some of the best pictures of what it looked like. Also check out the NJ.com where you can see more incredible photos. Also, though it isn't as close as some of the others this video is without any background noise from the videographers. One video is really great,but the amount of noise from the crowd is so intense that you can't concentrate on the fireworks. So here is the one I chose to put here. When you go to Youtube you can find the others. Enjoy this one!
So let me know what you did for 4th of July. Send pictures too. I hope to have the photos of us at Trump's very soon. Hope everyone had a great 4th of July and here's summer already! Have fun.
I hope to have a guest author this Thursday, Penny Ehrenkranz, who has an ebook we will be giving away to the winner of the drawing. Please come and enjoy the interview on Thursday, July 9th. More on the next post, also will talk about my experiences with ways to make money on your blog. I've done a lot of research on this and I have my own opinions to share with you.
Posted by Barbara Ehrentreu at 11:53 PM