What Does It Mean to Be a Woman? 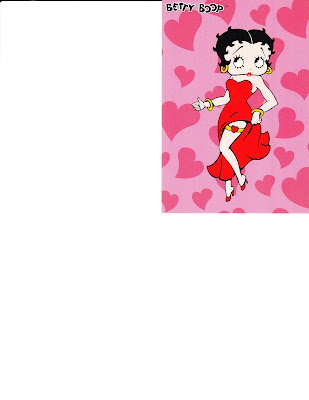 Okay, it's Postcard Friendship Friday and I am posting one of my own here. This is for Marie. I told you I had these postcards and finally got to scan one into the computer. I'm hoping to scan the whole collection. But Betty Boop represents to me a woman who is totally confident with herself and doesn't exclude anything from her life.
Yes, she 's a cartoon character and I know that!:) But I don't know, she just makes me smile.:)
It goes along with the theme of this post. Yesterday I told you I found a new blog because Out-Numbered referred me to the post there. I loved the discussion there so much that I decided to devote most of this post to it. I'm going to show what she said and then show Out-Numbered's comment. Then I'm going to show my comments and add to them. Here is what she said.
She is the author of My Bottle's Up who wrote this:
fact. and male readers out there, i don't write this because i'm a man-hating feminist (though i am a feminist). i write this because it's true.
my blog. my post. my truth. ya don't like it, don't read it. (I loved this approach, by the way!)
this truth is becoming more and more apparent to me by the minute. literally, the minute. if I see men unable to multi-task, make decisions, take care of their health, take care of their families...and then i see women carting babies,toddlers and groceries up three flights of stairs while on their cell phone, hosting a conference call. i see men who are unwilling toght for what they want... because they don't know what they want. and i see women fighting to the death for what matters to them because they see it, they know it, and they go after it. i see men sitting on couches. i see women running towards the goal line. i see men going through the motions. i see women creating motion.

"You see, the thing is that we like being lame. We embrace being lazy. Before our wives came along, we were able to cook our own food, clean our own apartments, follow directions, read a map, socialize like human beings, laugh, act silly, dress ourselves and do a whole slew of things. Back then, nobody told us we were wrong or called us idiots. We just got shit done and you know what? It worked! We survived! You know what else? You found us, picked us out fromthe crowd and married us because you liked how we acted. How quickly one forgets. But now, everything we do is completely and utterly fucked up. Not because it's wrong but because it's not how YOU do it. So like a dog that is kicked one too many times, we just stop doing it. It's much easier to get yelled at for not doing anything than it is to drag our fat asses off the couch and waste our time only to be told it's not good enough. That's my rant. Now... lets talk about how HOT chicks are when they ;Okay, so we are to believe that men don't do what they used to do because living with a woman makes them feel like they are doing things wrong? So they stop doing these things altogether because they can't stand the criticism? If this is true then all women are telling the men they marry or live with that everything they're doing isBTW, in case things get out of hand, the safe word is... Out-Numbered.
Maybe it's something else. Maybe it's that men just go ahead and do whatever they want to do without consulting with the woman with which they are living. I think it's important for couples to discuss big things together and when there is a chance that one or the other isn't sure of the decision he or she needs to clarify that.:)Also this applies to the little things. When a man is sent to the store he buys whatever he feels like buying. Unless you give him a list he will buy only what he wants without thinking about the needs of a woman. If you send a man to say, Costco, he will come home with huge amounts of things you would never buy as a woman and which if you were there with him he wouldn't even think to get them. Yet they manage to bring home stuff you wouldn't want to buy. In fact, most men with women don't care what a woman buys. But alone they'll buy the craziest things!!
It's the same thing when it comes to preparing their own meals. Men will eat the weirdest combinations of foods when they are alone. Yet when you ask them what they want for dinner they would never tell you that combination. In other words, I believe that men have a private life they don't want women to know about and it entails their exercising their freedom of choice. But if a woman is in charge of the kitchen and preparing meals, shouldn't she have the last word about what comes into her cupboards and refrigerator? What do the men out there think of this? Are men just trying to show how free they are?
I hope this question won't crash my blog as it has probably done for MyBottle'sUp.:)
Until the next time. Have a great, great Memorial Day Weekend and try to get to the beach.:) Any beach will do if you are landlocked, but people on the coast try to put your feet in the sand sometime this weekend..:)
Posted by Barbara Ehrentreu at 2:09 PM