Comedy: Is It Worth Traveling for 3 Hours? 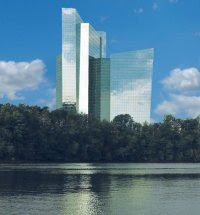 On Friday night instead of taking my own advice and taking two cars, we drove in one car to see Joel McHale from The Soup. My daughter had gotten the tickets and our seats were way up high in the upper rows. But this didn't even bother us as we blithely started out at quarter to four for an eight o'clock show at Mohegan Sun Casino and Hotel, which is about two hours away from us if there isn't any traffic.