Today my guest author is Karina Fabian, who is stopping here as part of her Live and Let Fly Blog Tour. Karina was here earlier to talk about another book and I am so happy to have her back.


Here is more about Karina:

BIO:
If there’s such a thing as ADD of the imagination, Karina Fabian has it—in spades.  Craft books, devotionals, serious science fiction, comedic horror and chilling fantasy—she follows her interests and the characters that tell her their stories.
Even before she could write, Karina strung tall tales about everything from making human pyramids in Kindergarten to visiting alien worlds.  Her first attempt at novel writing was in fourth grade; she completed her first novel in college.  However, her first published work was an anthology of Christian science fiction, Leaps of Faith, an EPPIE finalist for best anthology in 2006.  Her next anthology, Infinite Space, Infinite God, featured Catholic characters and themes and won the EPPIE for science fiction.   The second Infinite Space, Infinite God anthology came out in 2010.
Watching the comedy improve show, "Whose Line Is It, Anyway", inspired her noir-style dragon detective, Vern.  Vern and his partner, Sister Grace, have solved mysteries and saved the Faerie and Mundane worlds numerous numerous times in the DragonEye, PI stories and novels.  Their serial story, "World Gathering", won a Mensa Owl; and the novel, Magic, Mensa and Mayhem (Fabian’s first published novel), won the INDIE for best fantasy in 2010.
At a friend’s request, Karina wrote a funny story about a zombie exterminator, which grew into the Neeta Lyffe, Zombie Exterminator novels.  The first, Neeta Lyffe, Zombie Exterminator, won the 2011 Global E-Book award for best horror.
She also writes serious science fiction.  Her first SF novel, Discovery, is currently under consideration, and she’s working on a second on, The Old Man and the Void, based loosely on Hemingway’s The Old Man and the Sea, but taking place in the accretion disk of a black hole.
Karina has a strong faith, which she explored in her devotional, Why God Matters: How to Recognize Him in Daily Life, which she wrote with her father Steve Lumbert, and which won the 2011 Christian Small Press Publisher Award.  She also writes Catholic school calendars and has written three craft books for the Little Flowers/Blue Knights clubs.
Fabian is married to Colonel Robert A. Fabian of the USAF.  They have four children, a dog and a cat.  When not writing, teaching writing, or chatting about writing, she’s hanging out with her kids or swinging a sword in haidong gumbdo.
If you are like I am, it's hard to keep the myths of fantasy books straight. That is why Karina has written about it for us here:
On Norse Mythology OR  The Gods Must Be Crazy by Karina Fabian
Shall I start out by telling you how much I’ve loved Norse mythology, even as a child, and how I’d spend long hours curled by the fireplace reading the epic adventures of Thor and Loki, sighing over the doom-fated romance of Baldr and Hella, wondering if I could ever be as faithful a wife as Sigyn, who spent eternity protecting Loki from a poisonous snake; and how those experiences influenced my latest novel, Live and Let Fly?
If I did, I’d be lying.  I only had passing interest in Norse mythology, but when I needed a villain for my fantasy, Live and Let Fly, my husband suggested Loki.  That started me on an adventure to learn about and parody of the Norse Gods.
I thought the Greek gods were crazy!  Prometheus was chained to a rock and had his liver eaten daily by an eagle, remember?  Wimp.  In Norse mythology, Loki gets tied to a rock with his brother’s entrails while a venomous snake drips acidic poison on his face.  Wow!  But at least he doesn’t suffer alone.  His wife, Sigyn, stays with him throughout his punishment, holding a bowl over him to catch the venom of said drooly snake, so he only suffered excruciating pain when she emptied the bowl.  Talk about “stand by your man.”
Image from Wikipedia:  http://upload.wikimedia.org/wikipedia/commons/thumb/8/8e/Loki%2C_by_M%C3%A5rten_Eskil_Winge_1890.jpg/220px-Loki%2C_by_M%C3%A5rten_Eskil_Winge_1890.jpg
Must say, I don’t understand that kind of loyalty; Loki was no prize as a husband.  Apparently, he was into “experiences” as much as Zeus, sometimes taking animal form for his seductions.  (Which, I can’t say I get from a human standpoint.  Are you really that cold and desperate?)  Once, he even became a woman—the first successful sex-change (and reversal).  Trend-setter!
Did you know he was also married to a fire giant for awhile?  See, that makes sense—she was probably hot.
His daughter, of course, is Hel, or Hella, who is in charge of the underworld and has a monster dog and two servants (Sloth and Idler) to keep her company.  She must have been thrilled when the very handsome Baldr died, but his mother raised such a fuss that Hel finally said she’d return him to life if everyone mourned for him.  One giantess refused.  Baldr stayed in Helheim until the gods discovered the giantess was Loki in disguise.  Surprise!
By the time I got done reading about this, I realized 1) the gods must be crazy across cultural lines and 2) Loki is waaaaay to easy to cast as the villain.  Just in this little I’ve shared, there are scorned women, jilted lovers, people who have been cheated.  Put these guys on Geraldo!  Better yet—put these guys in my book!
I had a lot of fun digging into the ancient legends, however shallowly.  It gave the save-the-world comedic fantasy a whole new dimension.
Karina, after reading about the exploits of these Norse gods and goddesses I would love to learn more about your book and I see you have a blurb and an excerpt for us!! 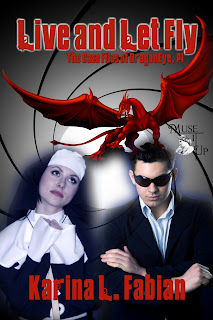 BLURB:
When a dragon and a nun play secret agent, all Hel breaks loose!
For a dragon detective with a magic-slinging nun as a partner, saving the worlds gets routine. So, when the US government hires Vern and Sister Grace to recover stolen secrets for creating a new Interdimensional Gap--secrets the US would like to keep to itself, thank you—Vern sees a chance to play Dragon-Oh-Seven.
No human spy, however, ever went up against a Norse goddess determined to exploit those secrets to rescue her husband. Sigyn will move heaven and earth to get Loki—and use the best and worst of our world against anyone who tries to stop her.
It's super-spy spoofing at its best with exotic locations (Idaho--exotic?), maniacal middle-managers, secret agent men, teen rock stars in trouble, man-eating animatronics, evil overlords and more!
EXCERPT:
Charlie started to close the door behind us, his other hand gripping the handle of his dagger so tightly I could hear the leather wrap on the handle strain, as we listened to the footsteps coming our way, slow, bored. My predator's instincts rose; then I had a great idea. I shook my head at Charlie and winked, and he shuffled out of my way, leaving the door ajar. I settled myself with my back to the door, just inside the shadows and let the script play itself out:


CLUELESS MINION enters Stage Left. He pauses, hearing a noise, but does not report it. Instead, he fondles the stars on his nametag and moves toward the empty hallway, his mind on adding another. (Probably saying, "I was proactive today!")
CLUELESS pauses at door, hesitating. He stands and, back to the door, reaches for his walkie-talkie.
Suddenly, a well-muscled and gorgeously scaled tail whips out from the crack in the door and wraps itself around his neck. He only has time to grab ineffectively at the tail before he's drawn into the darkness. The door shuts behind him.
Pan shot of the empty hallway.
FADE TO BLACK
I slammed my victim on the floor and pinned him with my forelegs, then I leaned my face in nice and slow, making sure he got a good look at my fangs before he saw my eyes. "Where's the girl?" I growled low and menacingly.
"Wh-What g-g-girl?"
Charlie crouched down by Stutterboy and glanced at his nametag. "Look, Philip, we're in a bit of a hurry. We know Rhoda Dakota's being held captive somewhere nearby. Now you can be a good survivor and tell us where…or you can be dinner."
"I-I don't—"
"Phil A. Minion." I mused and drooled a bit for effect. I live for these moments, I really do. I licked his cheek and asked Charlie, "Can I have fries with that?"
"Why not? This is Idaho."
Ha, Ha, Karina!! Looks like you have another winner here. I know you have a book trailer for this too!!


Sorry to Karina for rushing this before her beautiful photo and book cover could be displayed! Also did not put down any links and will do this now:


Website: http://fabianspace.com, http://dragoneyepi.net
Blog:  http://fabianspace.blogspot.com
Facebook: https://www.facebook.com/karina.fabian
Twitter:  http://twitter.com/#!/KarinaFabian
Google +:  https://plus.google.com/103660024891826015212
It is my pleasure to have Karina Fabian as my guest author and unfortunately, we do not have a link to a place where you can buy it, but you can go to The Muse Bookstore and see the Coming Soon. Here you can reserve your copy before the date!!


Until the next time, I realize April is just too busy a month to host guests too, but I can't say no:) Next week if you look at my Guest Appearances, you will see Sherie Swift is appearing here next Thursday. I will also be appearing on her blog at the same time, so come see both of our blogs that day!


Thank you to anyone I missed who Liked my Author Page on Facebook! Also, I have gotten a few comments that putting my poems on a separate page doesn't allow for comments, so soon I might have to break down and start a new blog just for poetry. We'll see. Meanwhile, I have posted all my poems there on My Poetry. You can find it at the top of this page. If you need to comment, please come back here and leave a comment or you can comment on my Facebook page or Author page. Also, please don't forget to leave a comment here and visit Karina's blog to read more about her and her books.

Posted by Barbara Ehrentreu at 6:00 AM