C.K. Volnek appeared here not long ago, but today she is back as part of the month-long MG/YA Blog-A-Thon. Her book, Ghost Dog of Roanoke Island, is being released by MuseItUp Publishing in September as an e-book.

Welcome to my blog once again, C.K. It is good to have you back here. 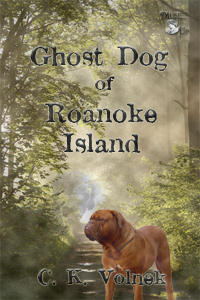 Tell us a little bit about yourself and your book.


Thanks to Barbara E for having me here today! It’s so nice to meet and greet so many new friends. To celebrate the MuseItUp MG/YA blog fest, I’d like to begin by introducing myself. My name is C.K. Volnek and I live in small-town USA in the upper plains state of Nebraska, where I share my home and time with my husband and four Papillon fur-kids. Our three children have flown the nest for college or career. I’m a graphic artist and meeting planner by day, but now keep myself busy writing and blogging by night.

I am proud to announce my debut tween novel, Ghost Dog of Roanoke Island, will be available September 23, 2011. It’s a tween ghost story with a twist of Native American folklore and based upon the mystery of the Lost Colony of Roanoke Island.

And to celebrate my book birthday, I am offering a free copy of the e-book to one lucky reader who leaves me a comment. Good luck!

Here is the book description:

Ghost Dog of Roanoke Island
In 1587, over 115 colonists disappeared from Roanoke Island…disappeared without a trace, leaving behind not only unanswered questions, but a terrifying evil.   Now it’s up to twelve year-old Jack Dahlgren to unravel the age-old mystery and save his family from the hateful beast that haunts the island.   With the help of newfound friend, Manny, a Native American shaman, and an elusive Giant Mastiff, Jack must piece together the clues of the Lost Colony to discover what really happened. Shrouded in ancient Native American folklore, it's up to Jack to uncover what the evil is and why it haunts his island. But can he destroy it...before it destroys him?
****************
The Mystery of the Lost Colony of Roanoke Island

To be honest, I don’t remember studying the Lost Colony in school, so it was with great interest when I read an article about it a couple of years ago. My muse instantly became intrigued. How could a whole colony of people just disappear? No one knows what happened and it has remained a mystery ever since.

The story actually begins a couple of years before the Lost Colony came to the island 1587. In 1584, the explorers, Philip Amadas and Arthur Barlowe were believed to be the first white people to set their sights on North Carolina. Having been sent to the area to scout and investigate the land by Sir Walter Raleigh, they returned with glowing reports and two Native Americans, Manteo and Wanchese. The Queen and all of Britain were enthralled with the glowing news of this New World’s wonders.

Queen Elizabeth granted Raleigh a patent to this new land and named the land Virginia. The next year, 1585, Raleigh sent a party of 100 soldiers, craftsmen and scholars to Roanoke Island.

This first colony of men was doomed from the beginning. They arrived too late in the season to plant and their supplies dwindled rapidly. Upon the supposed theft of a silver cup, Sir Richard Grenville and Ralph Lane led a march on the native village of Aquascogoc and burned it to the ground in retaliation, thus alienating themselves from the natives. In 1586, the men had had enough and returned to England with Sir Francis Drake, abandoning their settlement.

Despite the misadventure, Sir Walter Raleigh was not deterred. He recruited over 117 men, women and children to form a more permanent settlement and sent this new colony to Roanoke Island in 1587. John White was appointed Governor and among the colonists were his own pregnant daughter, Eleanor Dare, and her husband Annanias Dare. She gave birth to a daughter, Virgninia, on August 18, 1587, the first English child to be born on American soil.

Unfortunately the colonists did not arrive to Roanoke Island until July and by the end of August supplies were already dwindling. The ships were returned to England, along with an anxious John White, to restock and return with supplies. Upon their arrival in Britain, White and his ship found themselves stuck in England, the invasion of the Spanish Armada imminent.

Finally, three years later, White was able to return to Roanoke Island. Arriving on August 18, his granddaughter’s third birthday, he found the fort deserted and no trace of the colonists. The only clue found was a single word “CROATOAN” carved into a post and the letters “CRO” carved into a nearby tree.

White knew the Croatoan natives were a friendly people, but despite a search of the area, no further clues were found. There were no bodies or signs of war with the natives. The colonists of Roanoke Island had simply vanished.

Today, the Lost Colony of Roanoke Island still remains a mystery. So, my muse decided to come up with her own idea what happened. I threw in a ghost and a twist of Native American folklore to complete the story. I hope you’ll check out Ghost Dog of Roanoke Island.

Thanks again to Barbara for hosting me here today. And thanks to all our readers for stopping by. I would love to hear from you. I always enjoy meeting new friends.

You can contact me at ckvolnek@yahoo.com.
You can join me on my web page: www.ckvolnek.com, or visit me at my blog: www.ckvolnek.com/blog.html.
You can also find me on Facebook (C.K. Volnek) or Twitter (CKVolnek), Good Reads and Jacket Flap.
My book trailer is on youtube: http://www.youtube.com/watch?v=RbJEF9TjZzo
My books will be available at the MuseItUp Book Store beginning September 23, 2011: http://tinyurl.com/3pgwul2
as well as Amazon and many other fine book locations on-line.

Remember to leave me a comment. And to celebrate my book birthday, I am offering a free copy of the e-book to one lucky reader who leaves me a comment. Good luck!

Heavy footsteps pounded across the ground, the earth quaking with each step.
Jack peered into the gloomy dark, praying it was the dog. But he knew it wasn’t.
The sound grew louder and quicker. It was running straight for him. He stepped back, his muscles taut, hands twitching, staring into the shadows. A horrid stench filled the air, and a pair of yellow eyes emerged, seeming to float in the blackness of the woods. Jack gasped and backed up, pressing against a tree, trying to hide as best he could. His heart pounded. The tree bark dug into his arms, but he stayed quiet.
The eyes came closer and narrowed, staring into the dark. A low growl rumbled, swelling into a loud roar. Even the leaves on the trees seemed to tremble as the creature screamed into the night air. Jack clamped his hands over his ears, squeezing his eyes closed as the forceful shriek threatened to pierce his eardrums.
Moments felt like hours before the scream faded. Jack lowered his hands and inched farther away, his hands and knees trembling. A long, pointed snout emerged from the shadows, into a sliver of willful light. A crop of gray-brown hair stuck up and out from above the yellow eyes. The mottled nose dripped globs of saliva. Its jaws opened and closed, biting at the night, long white fangs gleaming against the darkness. Jack took another step. A stick broke under his foot.
Crack.
The creature growled, low and menacing. With a mighty leap, its gaunt arms thrashed at Jack.
Jack spun around, sprinting as fast as he could through the trees. Pain from his knee seared up his leg. Tears clung to the corners of his eyes and he blinked, forcing his vision clear. The beast roared and pounded heavily across the dirt after him. Branches trembled in its wrath.
Jack veered to the right, swerving around the spindly fir tree. Soft branches batted at his face. He didn’t dare look back, only prayed the monster went the other way. With a jerk, his toe tangled in the tree’s gnarled root. He crashed to the ground, his backpack flying into the air. For a moment he lay still, catching his breath, willing the drum echoing in his ears to silence. As a branch snapped in the trees in front of him, he realized it wasn’t the pounding of his own heart. Something else was coming, charging at him from the other direction. He was trapped!
****************************
Here is Charlotte's book trailer for Ghost Dog of Roanoke Island. it's late, but you must see it. Sorry, Charlie for leaving it out of the original post:

Thank you to C.K. Volnek for visiting and please leave a comment so you can be in the drawing for her free e-book!! Also don't forget to check the schedule for the MG/YA Blog-A-Thon to see who is appearing and where. Leave a comment on as many blogs as you can to be in the running for the grand prize!

Also please check my own appearances for the month.  On Wednesday I will be on Lawna Mackie's blog as a guest.

If you checked the Countdown Clock you know my book, If I Could Be Like Jennifer Taylor, is coming out in less than 4 days!! I have the finished copy now and I can't wait for Friday!!! Then it will be everywhere: Kindle, Nook, Barnes & Noble, Smashwords, Apple, and amazon. Also you can find it on the Muse Bookstore, Coming Soon (until 9/16)

Until the next time, have a great day and come back on Wednesday, September 14th when the MG/YA Blog-A-Thon will feature Sue Perkins here on this blog.:)
Posted by Barbara Ehrentreu at 1:27 AM

Labels: Barbara Ehrentreu, c.k.volnek, ghost dog of roanoke island, if I Could Be Like Jennifer Taylor, MuseItUp Publishing MG/YA Blog-A-Thon