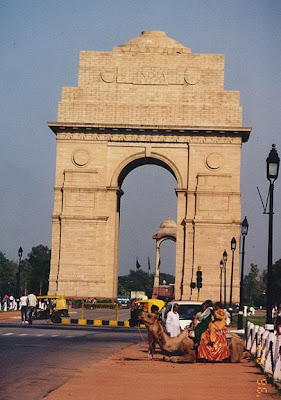 Today is the second day of Poem a Day and I hope that you are all either reading or writing poetry or both. I just got finished posting my second poem on the PAD website, which I will post here too.:) There are over 700 people writing and posting their poems in the comments. This is over double the amount that did it last year!! Poetry is really taking off and it's about time. I don't think there is a better way to express emotions than poetry.
The prompt today was "Outsider" "You can be the outsider; someone else can be the outsider; or it can even be an animal or inanimate object that's the outsider." (From Poetic Asides-Robert Brewer for Poem a Day)
Here is my poem for today:
Arriving in New Delhi, India – July, 1971

The smells assaulted me
Unknown spices scenting the
thick , moist air
Strange crawling creatures
larger than a rat spied on the
sides of the road
Auto fumes mixed with the same sharp
aroma surrounded us
Three wheeled vehicles transporting
passengers dressed in thin cotton tunics or
casually draped saris.
The air so damp it curled my hair as it
hit the carefully blow dried strands.
A sinking feeling began and spread
over my sweat drenched body
as I cursed myself for wearing denim jeans
The fabric rubbing and chafing my skin
Mosquitos and gnats swarmed at every light
as we sped along the road
I hoped for air conditioning, a shower, anything
familiar
for we had landed as modern day Gullivers in
a mysterious land and I wanted to huddle in a corner.

The warm air caressed my
face from the open windows of the cab
Our driver wearing a turban, burned incense on
his dashboard and talked in a clipped unknown language
on his radio
He used his horn instead of a directional
We arrived in New Delhi whose beauty would show
itself in days to come
Whose luminous sunsets would stay with me forever
But after I’d stripped off my jeans and washed in the
locker room style shower
I cowered in the twin beds we placed
side by side and prayed the night would be over.
copywrite 2009 by Barbara Ehrentreu
I wanted to include more pictures of New Delhi, but couldn't fit them here. Go here and you can see that though much of India has changed, New Delhi remains very much the same as when I saw if thirty-eight years ago.:)
Please add your own poems in the comments or post a poem you found that you loved!
Until the next time thank you to those who have commented and I hope that more will be sending me either comments or poems.
Posted by Barbara Ehrentreu at 9:58 PM