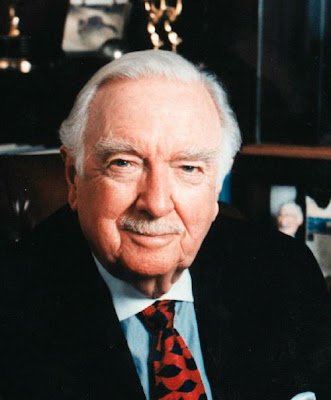 Some people become part of your life even if you don't know them personally. That's how it was with me and Walter Cronkite. With his fatherly voice and kind smile and eyes his presence was a given on my TV from the time he took over the anchor position on CBS until he retired in 1981.
With Eric Sevareid by his side to sum up all the events in a harmonious and artful prose I watched the CBS Evening News every night like clockwork. I got married in 1965 and my husband and I never missed a show unless it was impossible to see it. I didn't realize that in 1963 when Kennedy was assassinated that Walter Cronkite had only been on the air less than a year. Here was this news anchor who was there to show us the unfolding events on our TV screen. Though it was black and white and tiny by modern comparison it was just as mesmerizing for us. I watched the funeral with Cronkite's narration and witnessed the black veiled Jackie Kennedy and her two adorable children as they were on display for everyone to see. Being a media sensation was a new thing, so there weren't all of the zillions of camera people as there are today. But Walter Cronkite made it palatable for us with stories of her and a respect for privacy that TV has lost somehow. He made sure we saw everything including the transfer of the prisoner Lee Harvey Oswald. I remember his shock when Oswald was killed by Jack Ruby and all hell broke loose. Walter Cronkite kept his cool and reported the facts to us.
As the Viet Nam War built to a crescendo and they began sending back films of the fighting going on over there we watched every night and saw the battles with no respite from the suffering that was going on over there. Also we saw the flag draped coffins every night on the news and the body count was always mentioned. Until the war ended we lived with it on our TV during dinner. We didn't want to miss anything so we watched the news during dinner. There were no video recorders or Tivos around then.
In 1968 after a horrible spring when we lost Martin Luther King and Robert Kennedy, Walter Cronkite covered both the Republican and the Democratic Conventions with their protests and chaos. Unable to stay in the booth because he was thrown out of it for Huntley and Brinkley, he had to report from the floor. It wasn't like it was today. No computers to replay anything. You saw what was filmed.
Later in 1969 my husband and I were working in a camp and were in front of a TV in the camp's auditorium/mess hall with the entire camp assembled as we watched the landing of a spaceship on the moon. That in itself was amazing and for me something out of a science fiction movie. I had to pinch myself to prove it was true. But Walter Cronkite told us there was going to be more. There he was at Cape Canaveral interviewing the launch director and telling us there was going to be a walk on the moon. We held our breath as the hatch opened and Neil Armstrong came down the ladder. We could barely understand the sentence he said, but we saw his foot step onto the moon. "One small step for man. One giant leap for mankind." Walter Cronkite chronicled it for us. As he did with anything of note he stayed until the launch was complete.
Later when Lyndon Johnson died Walter Cronkite broke into our afternoon and told us about it. Soon afterward we were involved in the Watergate break in and Walter Cronkite led us through that and the hearings afterward. In between all the major events mentioned he reported the news concisely and with intelligence and humor. He had written most of it, so he knew it very well. I heard tonight from a few people who knew him that he was a good ad libber. I can believe it. He was on TV once for over 24 hours and had nothing to do except wait. He was able to talk the entire time.
When I heard his voice it made me feel safe. I'm sure that a lot of other people felt the same way, because at one point the entire country felt that he was the person with whom they felt the safest. He was the most trusted person in the United States. When he spoke it was like he was putting his arm around you and telling you everything would be okay. I miss that and have probably missed it much more than I thought.
Just now I felt a few tears start to well up. When you lose someone who has been a part of your life for so long it's often a big shock. But now thinking more about him and writing about him it has brought home to me that Walter Cronkite was very special and in a different mold than our current news people on TV. He was a newsman's newsman. He reported the news without any bias. That is something that some newspeople don't do today. I won't mention any names but they are mostly on places like FOX News and occasionally CNN.
Farewell Walter Cronkite. As you used to say: "And that's the way it is" on this 18th day of July, 2009. We will all miss you very much.
Posted by Barbara Ehrentreu at 9:58 PM