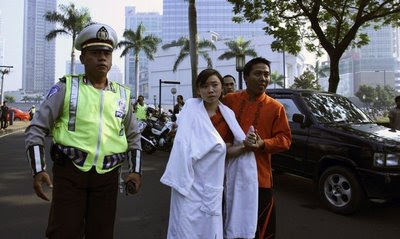 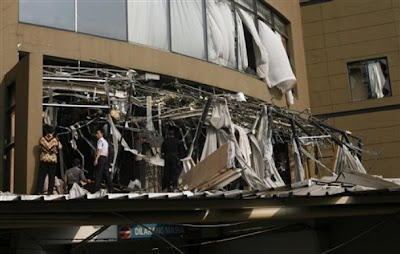 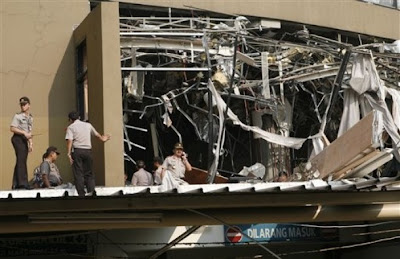 I was wondering what to write my blog about for this post when I heard about the bombings in luxury hotels in Jakarta. I have some pictures here from Twitter that show the devastation these explosions have caused. Especially awful to me are the expressions on the people's faces. They're saying it could be a group called Jemaah Islamiah, which was blamed for attacks in 2003. There's no way of knowing. But I'm sure that it probably has something to do with the election they had there for president. The president who was re-elected a week ago, has been successful for a few years in preventing these kinds of attacks. People relaxed and luxury hotels have been built there. The president of a cement company has been killed in one of the attacks. People fear that these attacks may weaken investors' confidence. They targeted the Marriott and the Ritz-Carlton, which were relatively close to each other and the attacks were minutes apart. There was also a roadside bombing on the outskirts of the city.
Here is yet again an example of how Twitter has the news on the instant. We were watching TV tonight when my daughter, who was Twittering on her IPod, gave a loud exclamation and said that there were explosions in Jakarta. This was about 11:30 PM. The TV did not have any news about it. This article you will see was written around 2:30AM. Twitter had the news almost two hours before the AP. This is probably why I have gotten onto Twitter and it's a whole new world. I'm not even sure how to do some things like retweeting, but I'm following some interesting people. If you want me to follow you, please find me on Twitter: @barbehr.
Meanwhile the video of the explosion site is now on CNN and the eyewitness who took this video was interviewed by Anderson Cooper. This looks like it's going to take awhile to figure out what happened. As you see the video you can see the damage that was done. It looks to me, though this is without any evidence of course, that it might have been an inside job. The witness talks about the level of security and it just sounds like it may have been one of those super secret put the bomb together with spit and string kind of operation. How awful for this country that has been trying to stop these attacks. Indonesia is the largest Muslim nation in the world. Yet it is keeping its modernity and encouraging investments. I hope that it won't disintegrate into a real disaster. The president of Indonesia says that he is going to be investigating and will not stop without knowing the answer. I give him credit.
This is BREAKING NEWS. So it might have changed by the time you read this post. Please keep up with the changing facts. While I was preparing this post Twitter updates came at hundreds per second. When I got onto Twitter and started reading about the bombings there were only a few hundred updates. Now there are thousands of tweets about Jakarta and all the major news networks have the story.
Next post I am posting the review for Ghost for Rent by Penny Ehrenkranz. Thank you again to everyone who left a comment. I gave you more time to comment. You have until Monday if you didn't read the interview or didn't have a comment posted. Just heard from Jason Mayo who writes one of my favorite blogs, Outnumbered. He won the last drawing and thanked me for Cynthia Polansky's Remote Control that he won. The winner of this drawing will probably get a book from my own collection.
Until the next time, thank you to all my readers and hope you were not involved in the devastating explosion in Jakarta.
Posted by Barbara Ehrentreu at 12:23 AM