Madoff to Go Away and Alabama Man Shoots Family and Others

One funny thing I should tell you before I start is that we went to our neighborhood Wendy's on Monday night to the take out window. My daughters like the 9-piece chicken nuggets and ordered them. But this was not to be. NO!!!! For we fell prey to the same thing that happened to that woman who called 911 when she couldn't get Chicken McNuggets.:) What set this apart is that we didn't give our money to the person in the booth yet. We found out as we were ordering. What is going on? Fast food places always have the food you want. Lucky for us, we went to a Wendy's a little farther down the road where they did have the 9-piece. But I understood how that woman felt. She had given in her money and couldn't get her McNuggets.:) Who knew that McDonald's has a policy of all sales are final? But it's still funny that she called 911. What did McDonald's do for her? They gave her a coupon for a free McNuggets.:) I don't know if that's enough. How much fast food are people eating lately? I'm waiting for the day when a McDonald's employee says they ran out of nuggets and finds a gun pointed at them. Guns and McNuggets not a great combination!
Update: 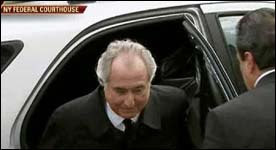 If you remember, I informed you of the new Bernie Madoff doll shown at the New York Toy Show. See my blog post: Crazy Things Are Happening All Over for more details on this case. Well today Mr. Madoff decided to plead guilty to 11 counts of fraud. We will know for sure in the morning, but it seems like this man will be going to jail for a good long time!!! I don't feel sorry for him at all. It looks like maybe we'll get our happy ending after all.:)
Bye bye Bernie!!!
We're not gonna miss you so
Bye Bye Bernie!!!
Yes, you have to go!!!
(Yes, I've borrowed shamelessly from "Bye Bye Birdie" - sorry to all those who are purists. This is a blog and it's all in fun.:))
Now if I can drag myself away from this happy bit of news there is a much more sober story to report today. I am sure you all saw it by now, the story about the man in Alabama who shot those people and then shot himself. The toll is now up to 12, because the man's girlfriend was inside the house with his mother when he burned it down. There are no words. I can only say that this country has got to enact gun laws as soon as possible. I don't care what the NRA thinks. This man was obviously distraught. It seems from the article that he had been laid off, but we will never know what caused him to go off the deep end and start shooting his whole family and random people. Obviously he had a plan to go to his old place and commit suicide there, which he did. But the part I can't deal with is that he had several different weapons in his possession. If that doesn't make just a little chink in the armor of NRA enthusiasts I don't know what will.:) NO MORE GUNS!!!!!!!
When I think about the children who were innocent bystanders in this path of mayhem and destruction who are now in hospital beds or worse, didn't make it. Hasn't this country had enough of these crazy people going on a shooting spree and destroying lives? When will it stop? It used to be that cities were scary and crime ran rampant in them. Now, though, I think it would be scary to live in some of these run down towns where people need to work two jobs just to stay alive. My feeling is that he knew he couldn't live on only one job and didn't see a way through the fog.
It's going to be scary everywhere soon, but we can help the country by toughening our gun control laws. Then people who might be going crazy will be neutralized at least for the time being. People in our country aren't used to hardships and a scene like this might be multiplied throughout the country as men and women find they need help to cope with the debilitating effects of losing a job.
I will be following this story and we should know everything by early tomorrow. Check on Google Reader if you have it or AOL/Netscape for more info. Also watch the TV news. With breaking news it's hard to get all the details until it is all reported. I'm thinking about the plane that went into that house near Buffalo a few weeks ago. Not much was known when it first happened. By the second day almost everything was known.
I was going to highlight another blog, but this story has swept away everything. I hope we learn more tomorrow. Until then, thank you to my new readers and new friends. I am on both the networked blogs on Facebook and Blog Catalog so welcome to anyone from either place.:)
Please leave a comment and let me know what you think of letting people own handguns and assault rifles.:)
Posted by Barbara Ehrentreu at 12:22 AM