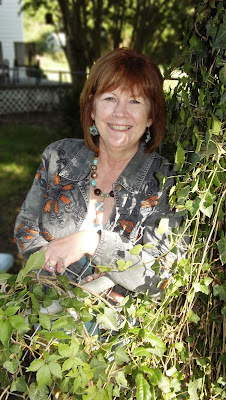 Today I would like to welcome Susan A. Royal, who is also an author with MuseItUp Publishing. Susan has been here before and you can read her post from last year, which was also a blog swap. This is becoming an annual event. The reason I say this is because I am a guest on Susan's blog today too with my main character from After, Lauren: A Visit with Lauren.

Susan is here to talk about her new book, Xander's Tangled Web, which will be on sale April 26. But you can pre-order it by going to the MuseItUp Bookstore. 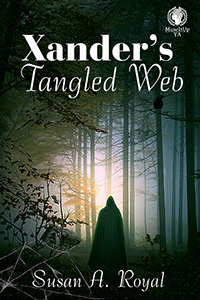 Please tell us all about this new book, Susan.


When Princess Mena vanishes without a trace, Xander must deal with gypsies, love potions and half-truths before unraveling the mystery.

Blurb:
After a late night visit to Battington’s marketplace, Princess Mena vanishes without a trace. Merchants are frantic, because King Leander has called for a curfew and postponed the Spring Festival until further notice. Certain his former constable is the man for the job, the mayor hires Xander to investigate, hoping he can solve the mystery in a hurry so things can go back to normal.
But Xander’s not so sure that’s possible, because there’s romance involved, and he knows when that happens folks who are normally very sensible seem to lose all reason. In addition to sorting out truths, half-truths and outright lies, he must deal with gypsies, love potions and an illegal moonshine operation before he gets to the bottom of things.

After reading about this I am sure everyone would love to read something from it. Here is an excerpt from Xander's Tangled Web:

“Out of my face, you mangy beastie!”
The rumbling bass voice came out of nowhere. Xander jumped like he’d been scalded. Up at first light and on the road soon after, he’d dozed off and allowed Quep’s reins to go slack. The shaggy little pony wandered over to the side of the road for tender shoots of grass growing there.
“Look at you, riding along with your nose stuck up in the air like royalty.”
Xander squinted in the direction of the voice and spied a man dressed in
raggedy brown homespun who blended with the landscape like a toad on moss.
Arms crossed and lips pinched together tightly together, the man stared back at him.
“Sorry, Frawl.” Xander yanked on Quep’s reins. “You’re out bright and early. Are you on your way to Battington?”
“Aye, I have pressing business.”
“Is that so?” Xander couldn’t begin to imagine what kind. It was a well-known fact that his second cousin once removed avoided anything remotely connected
with work.
The other man fished in his pocket and brought out copper coins. “Where d’ye think? I’m on me way to Battington to spend an afternoon at Ardley’s tavern. What about you?”
“I’m going to town as well, to pick up supplies and catch up on all the latest.”
Frawl flashed a grin. “Since we’re both headed in the same direction, how
about you let me ride along? I can fill you in on all the tittle-tattle.”
Xander ground his teeth. So much for a nice, quiet trip. “Sure. Come on.”
As big around as he was tall, Frawl grunted and strained a bit before he
managed to climb astride the pony. “You heard the latest?”
Xander shook his head. “Reckon not. I haven’t been to market in a fortnight. Suse and I live so far out we never get any news, unless a bird happens to fly by and share.”
“Unless a bird…?” It took a moment or two, but Frawl finally realized Xander was joking. After he stopped laughing, he pulled out a checkered rag, wiped his eyes and blew his nose. “You do have a quick wit.”
“Well, are you going to tell me or not?” Xander was less inclined to believe hearsay than most, but he did have a weakness for listening.
“Aye, I’ll begin at the beginning.” Frawl chuckled and rubbed his hands
together. “Of late, some of the royalty has been frequenting the market more often than normal. Not, as you might believe, for fresh blue milk or a rare piece of fairy silk, though I have been told the merchant in the big corner stall with all the fancy notions has some in his possession so fine he swears the cloth will float…”
“Get to the point, will you?”
“Pardon, I digress.” Frawl cleared his throat. “Now, where was I? Oh yes. It turns out it wasn’t just any royalty, but one of old King Leander’s daughters. Princess Mena herself. Anyways, word went round she was after a good apothecary. Reason being, she wanted to purchase a spell.”

What a place to leave us! As I said you can pre-order this exciting new book from Susan A. Royal at MuseItUp Publishing before April 26 at a $3.00 discount. It will be regular price after that.

Let's find out more about Susan A. Royal:

Born in west Texas and raised in south Texas, Susan shares a 100-year-old farmhouse in a small east Texas town with a ghost who likes to harmonize with her son when he plays guitar.

Mother to three children and their spouses, she has five grandchildren who are all unique and very special. Her family is rich with characters, both past and present. Her grandmother shared stories of living on a farm in Oklahoma Territory and working as a telephone operator in the early 20th century.  She learned about growing up during the depression from her father and experienced being a teenager in WWII through her mother’s eyes.

Susan loves taking her readers through all kinds of exciting adventures. So far, she’s written two books in her It’s About Time series, Not Long Ago and From Now On. They are time travel adventures about two people who fall in love despite the fact they come from very different worlds. In My Own Shadow is a Fantasy adventure/romance. Xander’s Tangled Web is a YA fantasy with romance. Look for her books at MuseItUp/Amazon/B&N.

Want to know more? Visit susanaroyal.wordpress.com or susanaroyal.moonfruit.com for a peek inside this writer’s mind and see what she’s up to. You never know what new world she’s going to visit next.

In My Own Shadow (fantasy, adventure, romance)
http://tinyurl.com/bqbxm41

Not Long Ago book trailer
http://youtu.be/vOIQVdWUigU/

All books available at MuseItUp, Amazon, B&N, Goodreads
http://susanroyal.moonfruit.com
http://susanaroyal.wordpress.com
Susan it has been a pleasure to visit with you and learn more about your new book. Now here is the best part. Susan will be my guest on Red River Radio Tales from the Pages on my June show. That will be Thursday, June 23 at 4PM EST. Also I will be talking with Jackie Minniti another fascinating author. Please join us at that time.

Until the next time as you know this is a blog swap, so you might want to go read about my character, Lauren and her crazy sophomore year in high school. Also my April show for Red River Radio Tales from the Pages will feature my favorite poet and good friend, Phillip Matthew Roberts talking about his new book, Lost and Found. You can find his book on lulu.com.

In between I am posting my poems for Poem A Day on this blog every day. Thank you to all who are reading them. My new book of poetry: Losing My Love, Finding Myself is still in the planning stage. I will let everyone know when it is published as you all probably know.

Posted by Barbara Ehrentreu at 11:25 AM