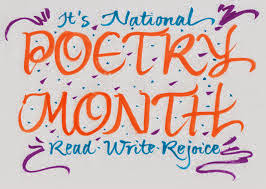 The days have been so busy and I have had so much to do that I have not posted poems for a whole week!! But here are the latest poems up to Day 22. I can't believe April is almost over and wondering what I will do when I don't have to write a poem a day. Or in my case have to write two poems a day. It has been exhilarating and I have tried new kinds of poetry too.

As usual all of the prompts here come from Robert Brewster's blog: Poetic Asides. I am also writing to prompts from World Poetry Open Mic, but I am not posting them here. After April I will post all of the poems I have written in the Poetry tab on this blog.

Also, I announced it on Facebook, but those who might not have seen it, one of my poems has won an award. It has placed in the Nassau County Poet Laureate's Annual Poetry Contest. I am thrilled of course and looking forward to the ceremony. Also with me at that ceremony will be Pearl Ketover Prilik and Nurit Israel, two fabulous poets who I have known for several years. Thank you to the Nassau County Poet Laureate Society.

So here are all the poems I missed posting:


April 16
Prompt: Write about a restaurant you like
Pony Express

Having a few hours before the movie
and our stomachs growling close to
dinnertime we happened upon this
unassuming place where you order
at the counter and your food is
served on metal trays
yet in the menu above it we saw
homemade buns and all organic
my mother always said when you
don’t know what the food is like
order a cheese sandwich so I
ordered grilled cheese — expecting
the usual soggy, yet dry experience
my surprise came when I was rewarded
with crunchy and creamy on what seemed
like the largest slices of bread ever
toasted to perfection and keeping the
taste of butter in my mouth
along with it the homemade chips
with guacamole and their french fries
crispy and delicious making me wonder
how the tiny space in back of the counter
could possibly bring forth such delicacies
my palate knew we would return
as the riders of the old Pony Express
returned to their place of origin
and did I mention the homemade hot dog buns?
copyright 2016 by Barbara Ehrentreu

There is an election this year
to elect someone to fill the
office of President
Why do they call it an office?
does the President have windows
or cubicles or a boss to tell him/her
what to do?
is it because the President has an office?
an office most would dream to have
can you imagine every day walking into
a room appointed especially for you
with the prerogative to shut the door
on all who are on the opposite side?
What is is like to hold the office of President?
our current President’s hair has turned almost
white in only eight years from the strain of this
office pressing on him
why does anyone want to take this office
maybe they feel they will do a better job than
the one who came before them
it’s as if Sisyphus created a job where he could
push his ball of dung up the hill while sitting in
a really posh surrounding and having people wait
on him hand and foot — yet that ball needs pushing
and he must do it himself — others can try but
it is his job and he must persist in this fruitless attempt
so we change the pushers every four or eight years
but that ball still is their major job and it is a dirty
little secret that this is the President’s job
So welcome to the Oval Office to the next elected President
and get ready to start pushing.
copyright 2016 by Barbara Ehrentreu

April 19
Prompt: Write a poem about cool or uncool

In the fifties and early sixties
being cool was wearing black
and a nifty beret on your head
visiting a dark, dank coffee house
where you listened to very cool
poets expounding on their angst
and you didn’t clap for that wouldn’t
be cool. You snapped your fingers
you were a cool cat — a beatnik
too cool to be seen during the day
appearing only at night in your haunts

then it all changed and it was cool to
make money and to move up in the world
to accumulate possessions until you had
to buy more homes to find them a place
never caring for the way you destroyed
everything you touched, including the
ones you supposedly loved

and finally it was cool to eat organic food
care about the environment
cool to be who you were
and poetry became cool too
perhaps it was cool all along
and rediscovered like those
flowers lining the road you only
glance at while driving, but when
you walk along the side of the road
the beauty of these golden daffodils
astounds you.
copyright 2016 by Barbara Ehrentreu

People are always telling me secrets
don’t tell this one and don’t tell that one
and I don’t ever, because I lock them away
in a secret place where I hold the things
people tell me in a spot where the unsaid
lives in a bubble inside of my head
when they tell me their faces hold such pain
I feel if I told the words they gave to me
they would dissolve in sorrow
so I hold them close to me
words unsaid
powerful words like bullets in my brain
waiting to pounce if ever the chance arrives
they push and push to be unfettered
but I keep them corralled and left unsaid
though they chafe to be let out of my mouth
would I could regurgitate all of these secrets
vomiting the words unsaid to clean my mind
and yet I know if I do more will replace them
for I can’t say no to: “Can I tell you a secret?”
copyright 2016 by Barbara Ehrentreu

April 21
Prompt: Write a poem in response to another poem

After: How to Triumph Like A Girl by Ada Limón
http://gulfcoastmag.org/journal/252/how-to-triumph-like-a-girl/

Sure the race is rigged. You're a girl
the rules are warped for you
you must carry the heavy weight
they've handicapped you from the start
your saddle bag is heavier than a male's
but you carry it like a thoroughbred
forging forward through the crowd
aware of your handicap but shouldering it
forging ever forward against the hard wind
of a man's world with your steady gait
and sometimes you fall back as in any race
but the course is straight and you will succeed
and throw that weight in the face of the
males who will still sneer and say never can happen
when there you will be in the winner's circle
copyright 2016 by Barbara Ehrentreu

In the brief interlude between sunset and dark
we played a game when I was a girl
watch the sky and find the first star you see
make a wish as soon as you spy this light
and don't tell anyone
I wish I may and I wish I might
have the wish I wish tonight
and I would dream wish for things
a doll, a new dress, to stay up late
but childhood is a blip in time
eons while you are in it,
but gone in a flash like a star's light
and the grown up girl/woman still wished
upon the first star playing the game
and wishing for the impossible
the marriage dream, the children dream
and as each year passed the dreams
became reality yet the game continued
each night as the sun closed down for the day
and darkness overcame the sky
I peered upward for the first star
teaching my children and hearing them
play the game as they wished
for the impossible to come true
but now as the first star's light
shines in the evening sky
and purple turns to black
my only wish on this light
sent from light years away
to shine on me
is to see your face again
and watch you
laugh as I play my silly game
of catching the first star
copyright 2016 by Barbara Ehrentreu

Until the next time my friends, thank you to any who enjoy my poems and read them and I hope to be more on time for the rest of the month.

My radio show Red River Radio Tales from the Pages is coming up this Thursday, April 28 at 4PM EST - 6PM. My guests are going to be returning guest, esteemed poet and author Phillip Matthew Roberts and novelist Nicholas Maze, who is a first time author on the show. Also we will be hearing from Susan Joyner Stumpf, who is the publisher of Phillip's book, Lost and Found. This looks to be a great show and not to be missed. I know I say that about all of my shows, but this one will be special I am sure. If you miss it at the time it is live you can always listen to the archive. Just click on the link I will be posting on my page and you can hear it at any time.

Hope you are enjoying the spring weather and writing or reading poetry. I will soon have big news about both my book, After, and my new poetry book, Losing My Love, Finding Myself, which will be published very soon.

Posted by Barbara Ehrentreu at 12:26 AM