My Thoughts on What is Going on in Egypt 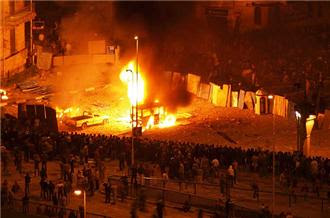 When a country that has been stable for thirty years suddenly becomes a place of revolution and chaos you have to wonder why. A few days ago as some commentators said, the atmosphere in Tahrir Square in Cairo was one of peace and very much like being at a peace march or peace rally. However, this all changed when goons from the Mubarak administration began to attack the peaceful demonstrators. The Mubarak government held the country together in a benevolent dictatorship. But even a dictator can't overcome a country that is awash in poverty and joblessness. They have 25% unemployment and no end in sight. When Mubarak won the presidency again it must have been the final straw for so many Egyptians who had lost everything
According to the news commentators the country is pretty much non-existent. You can no longer get money from ATM's, buy food, get gas, etc. Last night cars and trucks were set on fire. As an onlooker with no frame of reference I had no idea which side was doing this. But I did see the men on the bridge throwing Molotov cocktails toward the revolutionaries without stopping. The demonstrators tried fighting back with rocks and Molotov cocktails of their own as they tried to defend themselves. Then they began to get proactive and now it looks like Mubarak will be forced to resign and a new government will be put in place. I worried that a stray cocktail might hit the museum which housed antiquities that are irreplaceable. They are thousands of years old and if anything happened to destroy this building it would be tragedy for the world.
The other thing is journalists are being attacked and beaten. When a country doesn't want news to get out they attack the journalists and censor the news. I just heard that several news people in Egyptian TV have resigned in protest over the control of the government over the news. I applaud these people. On a sad note I just heard on MSNBC that a blogger in Alexandria was beaten and died in prison and now there is a protest over this in Alexandria. This blogger had actually posted the names of police in the area on his blog. The Egyptian government has gone too far and I hope the people can keep freedom alive in Egypt.
One thing I wonder is with a dictator like Mubarak were the people losing their freedom gradually or is this all of a sudden? When did it become impossible to talk against the government? If I were an Egyptian, would this blog cause me to be arrested and imprisoned for speaking my mind? Were the Egyptian people living in a blanket of lies when they went about their business? Or were they aware that this guy had hidden claws? Well, Mubarak has pulled out his claws and sharpened his teeth, but I am hoping he won't be able to use them for long.
I don't know how this will play out, but I hope that Egypt will finally be able to have democracy and be able to go back to being a normal country. I feel for the Egyptian people and especially for the normal families whose lives have suddenly changed. I feel for the children who are caught up in this disastrous time and hope that their lives will be improved by this. All of the schools have been closed. I am on the side of peace and democracy and I always will be.:)
I know this isn't about writing per se, but in a sense it is, because we need writers to be able to tell the truth and I hope that when this area is stabilized the writers will be able to tell their own stories.
Until the next time, I want to congratulate MuseItUp Publishing for it's 2nd place win on Preditors & Editors' Poll and congratulations to all of the writers from this same publisher (my publisher:)) who won too. Come join us in our Book Club to interact with authors, get sneak peaks into upcoming books and contests for free books. My own book for anyone who doesn't know by now, If I Could Be Like Jennifer Taylor, is coming in September from MuseItUp Publishing and of course I am thrilled, but I am also very happy to be part of the Muse family.
If anyone is interested I am on Twitter: @barbehr. Also find me on Facebook: Barbara Ehrentreu.
Upcoming visitor:
On Sunday, February 6th I will be hosting Penny Ehrenkranz on her blog tour for her new book of short stories, A Past and a Future: Speculations in Fantasy If you like fantasy and enjoy reading fantasy you won't want to miss this guest author interview. Penny has been here before as a guest for her book Ghost for Rent.
Posted by Barbara Ehrentreu at 8:24 PM

Labels: Cairo, Egypt, if I Could Be Like Jennifer Taylor, Mubarak, Museitup publishing, Tahrir Square