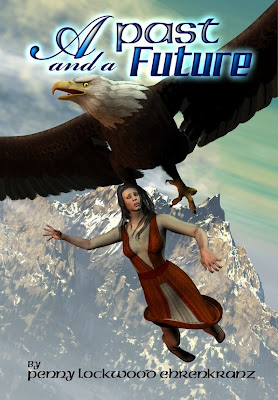 Today my guest author is Penny Ehrenkranz, who is stopping here on her blog tour for A Past and a Future, her new anthology of fantasy short stories. Penny Ehrenkranz has been a guest here before and at that time we had a wonderful chat about her various writings and her writing itself. Since she has very little time I have concentrated on her new book and I am very excited to be introducing it to you!
Are you a lover of fantasy? If you are, then A Past and a Future is for you. Chock full of small vignettes of various fantasy worlds it's like a smorgasbord of fantasy stories.:) Penny has stopped by to talk about this book and here she is:
Guest Author Interview with Penny Ehrenkranz

Welcome Penny! It's so great to have you back here to talk about your latest book.:)

Barbara: When you began writing A Past and a Future, did you have all of the stories ready?
Penny: Yes. It was more a gathering than a writing when it came to putting together A Past and A Future. The original idea came in 1999 when I published a collection of stories with Bookmice, an electronic publisher. Unfortunately, the publisher folded after a year, and very few copies of the book were sold. Not many publishers want to do collections of stories. When I found out Sam’s Dot Publishing did collections, I approached them with the idea of resurrecting, Then and Later, my original collection. Instead of having all the same stories, I dropped some, added some, and put in a couple never before published.

Barbara: What made you start to write fantasy?
Penny: I read fantasy for my own personal enjoyment. Since that’s what I read most of the time, that is the genre I’m most comfortable writing. I also enjoy science fiction, which is why some of the stories are soft sci fi. I love the whole idea of magic and magical creatures.

Barbara: In your first middle grade novel, Ghost for Rent you wrote about a family that moved to a rural area from the city. Is Ghost for Lunch about this same family?
Penny: Yes, Ghost for Lunch is about the same family. In this one, though, the MC’s best friend moves away, and a new family moves into the neighborhood. When Wendy and her brother meet the new neighbors, they get involved with the ghost in the restaurant the neighbors are planning to open.

Barbara: A Past and a Future is composed of many different stories with various main characters. How did you decide which stories to include? Or were all of these stories written especially for this book?
Penny: Many of the stories were previously published in small press magazines with limited readership. I chose the stories that I enjoyed writing. I wanted a combination of stories from the past (fantasy) and stories from the future. The theme which ties them together is a message of hope no matter who you are or where you are.
Barbara: Yes, I definitely got that after reading several of them.
Barbara: As I read each story I found the main characters of each to be very memorable. I do not usually read fantasy stories, but your first story gripped me and I continued to read several more in a row. Have you thought of developing any of these stories into a novel?
Penny: Not any of the ones in this book. I do have two short stories which ended up being expanded into a series of shorts about the same characters. One of my back burner projects is to combine those shorts into either novellas or novels.

Barbara: Please tell our readers the path to publication for this book.
Penny: I answered this above. The only thing to add would be after the book was accepted, it still had to go through an editing process, like any other book, even though most of the stories had already seen publication in one way or another.

Barbara: Besides writing, do you do anything else?
Penny: I enjoy spending time in my garden. In fact, today I will be working with my seeds and getting them into their little pots for transplanting later. In the evenings, I usually crochet, either making gifts, crafting for my 3 year old granddaughter, or for my grandson who will be born in June. In my other “spare” time, I edit for three small traditional publishers, MuseItUp Publishing, Damnation Press, LLC, and 4RV Publishing. My other activities revolve around cooking ethnic foods, spending time with friends and family, and of course, reading.

Barbara: Do you have a favorite story? Why did you pick this story?
Penny: My favorite is probably Ashley of Ashland. I like the characters. They’re not handsome or particularly talented, but they love each other, despite the odds against them. They are also loyal to each other through all the trials and obstacles they have to face.

Barbara: When writing a short story, what are the most important aspects to remember?
Penny: Like any story, you need a strong plot, characters readers can identify with, and tight writing. With a short story, the tight writing is essential. A short story writer only has a limited number of words to work with to bring the story to a satisfactory ending. Even with a couple of thousand words, the author needs a beginning, a middle, and an end.

Barbara: Are you planning a sequel to A Past and a Future?
Penny: I do have some thoughts about another collection, but nothing concrete.

Barbara: You write in many genres and for many age groups. For which genre and age group do you prefer to write?
Penny: I actually enjoy everything, except erotica. I don’t write that at all. I do some light romance, I write soft horror, I write paranormal. My favorite is probably fantasy, although right now, I seem to be concentrating more on my children’s writing.

Barbara: Please tell us if you have any other books that are going to be published soon?
Penny: I have contracts for two romances, which will be published by MuseItUp Publishing this fall…Love Delivery and Lady-in-Waiting.

Barbara: Wow, Penny, I didn't know this! Congratulations!! My book, If I Could Be Like Jennifer Taylor will be coming out in September. When they are released you will have to come back here and talk about them.:)
Penny: I have contracts for four children’s books, which are scheduled with 4RV Publishing. The sequel to Ghost for Rent, Ghost for Lunch will be coming in 2013. Funny Dog, a picture book, will be published in 2012, Many Colored Coats, a picture book, is contracted for 2014, and Boo’s Bad Day, also a picture book, will be published in 2015.

Barbara: 4RV Publishing is another great publisher. I do some editing for them and maybe I'll be editing your books. You never know.:)
Barbara: Do you have any WIP’s?
Penny: I am working on a YA paranormal, but I’m not sure yet what direction it will take. I’ve also started working on the sequel to Ghost for Lunch, tentatively titled Ghost for Sale.

Barbara: Where can our readers find A Past and a Future? Where can they find your other books as well?

A Past and A Future
http://www.genremall.com/anthologiesr.htm#pastfuture

Until the next time, thank you to all my readers and I wanted you to know I will be a guest on Teen Word Factory on February 15th blogging about the problems a high school girl might have. Also please join me on Thursday, February 24th for my February Blog Talk Radio Show, RRWL Tales from the Pages when a couple of my favorite authors from MuseItUp Publishing, Lin Holmes and Kat Holmes stop by to talk about their ever increasing amount of published books.:)

Posted by Barbara Ehrentreu at 9:40 AM