Hooray for Librarians with Guts! 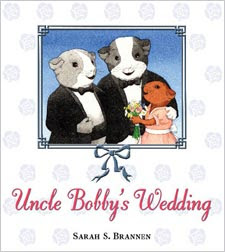 Reading Twitter can sometimes be repetitive and many times you aren't learning anything new that you want to learn.:) But occasionally Twitter can bring you to an old story or show you a new one that is developing. That is the case with this letter to a librarian about the children's book, Uncle Bobby's Wedding by Sarah S. Brannen. Recently a woman sent an irate letter to this librarian asking that the book be either taken off the shelves or placed in another area where parents could monitor it. This kind of behavior has caused many books to be banned and removed from their local libraries. People would rather get rid of a book than allow their children to read material of which they don't approve. The librarian wrote a letter back to the woman explaining why this book needed to stay right where it was!
Being a children's writer I usually keep up with the new releases. So when this book was released this year it created a very big stir. But this book is harmless and deals with a very complicated issue in a very simple way. The idea of gay marriage has it opponents and proponents. But this children's book allows young children to understand what is happening here. As the librarian explains, this understanding and beautifully written book shows the story of a young girl who worries that she will lose her uncle if he gets married. The letter that was sent back to the woman was very thoughtful and explored every possibility. Though the story happened in July it is still very timely. It shows the power of words. This librarian's letter gives you hope that more people will be able to answer the narrow minded people who call for banning or hiding controversial books.
Until the next time thank you to my readers and to anyone who has just found these meanderings. I hope that some of you got a chance to hear my new show on Blog Talk Radio that had it's first airing last Thursday, called Red River Writers Tales from the Pages. Happy October!!!
Posted by Barbara Ehrentreu at 2:05 AM