"Trucker" Is A Pleasant Surprise! 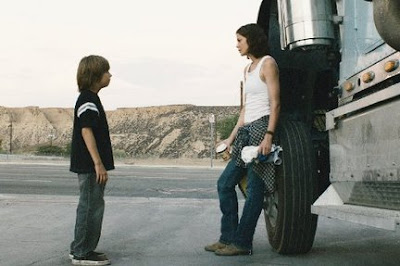 left to right: Jimmy Bennett as Peter and Michelle Monaghan as Diane in "Trucker" 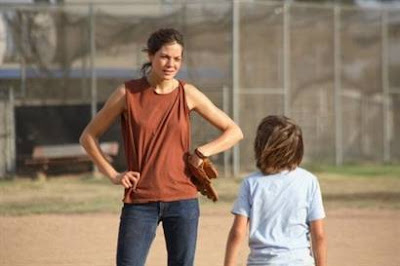 I won't lie. I was disappointed that no one commented on the last post. So I wrote my own comment just so I wouldn't see that sad zero staring at me.:)
Anyway, this has nothing to do with the last post, but it does show how my life is a little unusual. So I saw the ad for the independent film, "Trucker" in the local art film theater's schedule and I wasn't that interested. The name of the director intrigued me, because I knew someone who had the same last name and I wondered if maybe they were related. Well it turns out not only are they related, but my friend is the film maker's father!
His father and I met during the dark days after the 2004 election when no one wanted to believe that there had been election fraud in Ohio. But Nick felt we needed to do something and I feeling the same way decided to join him and a group of like-minded people who came to demonstrate with him. We were in the forefront of the whole movement, yet at the time people were still uncertain about being vocal about it. We stood out there with signs to honk and we did get more support than we thought. Remember this was December, 2004.
Anyway, getting back to the reason for this post, Nick and I know each other since then.:) So a few days ago I got this email from him inviting us all to go see his son's film, "Trucker".
"Aha," I said as I read the email. "They are related!" And now I needed to see the film. There's quite a bond between people who have stood in front of the FBI Building and demanded an investigation into the vote.:) (For anyone who would rather forget that election or feels there was no fraud, you can skip anything related to the demonstrating.:)) The thing is I needed to know more about this film before I commi 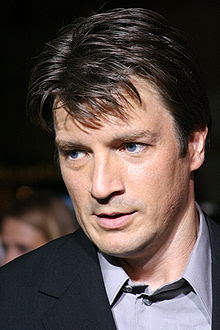