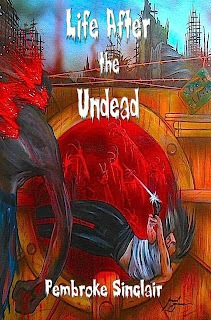 Today is the official start on my blog of the MuseItUp Publishing MG/YA Blog-A-Thon. Please welcome my guest, Pembroke Sinclair. She has graciously sent us an excerpt of her soon-to-be-published e-book: Life After the Undead released by e-Treasures is available now.

Pembroke Sinclair has had several stories published in various places. She writes an eclectic mix of stories ranging from western to science fiction to fantasy. Her stories have been published in various places, including Static Movement, chuckhawks.com, The Cynic Online Magazine, Sonar 4 Publications, Golden Visions Magazine, and Residential Aliens. Her first novel, Coming from Nowhere, is now available at eTreasures Publishing and Amazon.com. Her story, "Sohei", was named one of the Best Stories of 2008 by The Cynic Online Magazine. If you would like to contact Pembroke, she can be reached at pembrokesinclair@hotmail.com or pembrokesinclair.blogspot.com.

The world has come to an end. It doesn’t go out with a bang, or even a whimper. It goes out in an orgy of blood and the dead rising from their graves to feast on living flesh. As democracy crumples and the world melts into anarchy, five families in the U.S. rise to protect the survivors. The undead hate a humid environment, so they are migrating westward to escape its deteriorating effects. The survivors are constructing a wall in North Platte to keep the zombie threat to the west, while tyranny rules among the humans to the east. Capable but naïve Krista is 15 when the first attacks occur, and she loses her family and barely escapes with her life. She makes her way to the wall and begins a new life. But, as the undead threat grows and dictators brainwash those she cares about, Krista must fight not only to survive but also to defend everything she holds dear—her country, her freedom, and ultimately those she loves.

I will never understand peoples‟ fascination with the apocalypse. Why would you waste so much time and energy worrying about something you can‟t change? Besides, most of the time, it never comes to fruition anyway. Remember Y2K? What a hullabaloo that was. People were so afraid computers were going to fail and throw society back into the Dark Ages that they were stockpiling supplies and moving into the wilderness so they could get away from technology. Why would they move to the wilderness? If technology was going to fail, wouldn‟t they be just as safe in a city? I guess they were afraid when technology failed, everyone would go crazy and start killing each other. Either way, it didn‟t happen. I wonder how those people felt afterward.

Then, there was the whole 2012 scare. This one was supposedly based on ancient prediction, so you know it was reliable. Are you kidding? Even the Mayans didn‟t believe their own ancestors‟ “vision.” What happened was there had been a tablet that had the Mayan calendar carved into it. The end was broken and faded, so no one knew what it said. Our culture, being the pessimistic lot that we are, automatically assumed it was an end-of-the-world warning. But, again, nothing happened on December 21, 2012. Christmas came and went, and I think everyone, everywhere, even the skeptics, had a little something more to be thankful for. Life went on as usual, and all those doomsayers faded into obscurity.

The day the world did end was pretty nondescript. By that I mean there was no nuclear explosion or asteroid or monumental natural disaster. There weren‟t even any horseman or plagues to announce the end was coming. The world ended fairly quietly. I couldn‟t even give you a date because it happened at different times depending on where you were. It was never predicted, and I‟m sure a scenario that no one even considered. Who really thinks the dead are going to rise from the grave and destroy the majority of the population? No one but Hollywood, and we all know those are just movies. But that is exactly what happened. Those of us that survived were left wide-eyed, mouth agape, trying to figure out what to do next.

There are many more Muse authors who are hosting authors for the MG/YA Blog-A-Thon all September. See the schedule here. Many are giving away free goodies if you leave a comment. Leave a comment on all of them and you can win the special prize.

Please check the schedule for appearances on this blog on MG/YA Blogfest in September.

Until the next time, thank you to my new follower and thank you to the people who continued to come here even though no new posts were up.:) Due to the hurricane and my real life situation I was unable to post anything for awhile. With my book release coming up my life has gone into overdrive! Now with the Blog-A-Thon (We seem to have changed the name) all this month, the posts will be changed more frequently.

For people who have been following the saga of my husband's health problems, he is getting better!! He is getting his infusions and physical therapy so he is starting to drive and walks much better. Thank you all for your prayers and concern. Life may get back to normal soon.

Tonight I participated in another Live Book Read and if you want to see a recording of this you can go to our fan page: Book Reads on Facebook. Can't decide if I will participate in a third one, because I don't want to give away too much of my book.:)


Posted by Barbara Ehrentreu at 8:32 PM