The end of the MG/YA Blog-A-Thon is almost here and I am happy to say the organizer of this amazing blog tour is here as my guest today!! Marva Dasef is also the author  of her own MG fantasy, Bad Spelling, which will be released this October from MuseItUp Publishing as an e-book. I want to thank Marva for her daily tweets telling everyone about the Blog-A-Thon. I think it is fitting that with all of her work she is the last guest on my blog for the Blog-A-Thon! 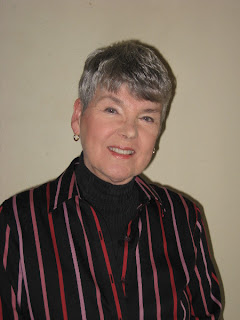 Marva Dasef is a writer living in the Pacific Northwest with her husband and a fat white cat. Retired from thirty-five years in the software industry, she has now turned her energies to writing fiction and finds it a much more satisfying occupation. Marva has published more than forty stories in a number of on-line and print magazines, with several included in Best of anthologies. She has several already published books of fantasy, science fiction, and mystery. A few more are scheduled for 2011 and 2012 from her super duper publisher, MuseItUp.

Please tell us about Bad Spelling:

BAD SPELLING – Book 1 of the Witches of Galdorheim
A klutzy witch, a shaman's curse, a quest to save her family. Can Kat find her magic in time?

If you’re a witch living on a remote arctic island, and the entire island runs on magic, lacking magical skills is not just an inconvenience, it can be a matter of life and death–or, at least, a darn good reason to run away from home.

Katrina’s spells don’t just fizzle; they backfire with spectacular results, oftentimes involving green goo. A failure as a witch, Kat decides to run away and find her dead father’s non-magical family. But before she can, she stumbles onto why her magic is out of whack: a curse from a Siberian shaman.

The young witch, accompanied by her warlock brother, must travel to the Hall of the Mountain King and the farthest reaches of Siberia to regain her magic, dodging attacks by the shaman along the way. At the Troll Kingdom, a young troll, Andy, joins the siblings in their quest to find the shaman and kill the curse. 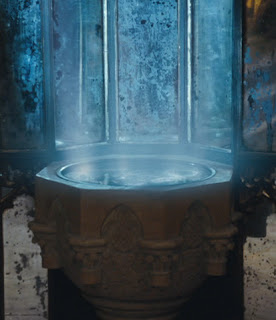 Crystals, water, fire, clouds, steam, chicken bones. All of these objects have been used to see into the past or future. Well, that's the story anyway. You recall the Penseira from the Harry Potter series. That, too, is a scrying object, but recalls memories of the person using it.

In Bad Spelling, the witches use a scrying crystal. They can see the past only, but the past can be just a seven-second delay behind.

Kat wants to find out about her father's family. Boris was a marooned Siberian fisherman who happened to get stuck on Galdorheim Island. Kat's mother liked his looks, rescued him, and they hand-fasted. Kat was the result of the union. Shortly after her birth, however, Boris was trapped in an ice cave collapse. His body remains encased within the glacier.

Kat asks her mother to trace Boris's path back to his origins. Ardyth had never done this before because it was against witch code to scry a person without their permission. When Kat points out that Boris could hardly object, Ardyth agrees to scry Boris's past. 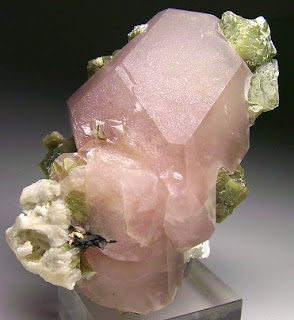 The crystals I describe aren't the standard Gypsy crystal ball, but natural morganite crystals. Out of the rough crystal structure, the witches shape a scrying crystal from the pure morganite.

Ardyth rummaged through a box on the floor and extracted a large chunk of Morganite beryl. “Ah, here it is. I haven’t used this in years.” She placed the pink, six-sided crystal on the table. She opened a crate standing near the worktable and rummaged through it. “Did you know the Druids used beryls for scrying? Morgan Le Fay learned how to use them from Merlin. He was a Druid, you know.” She pulled a white cloth from the crate and laid it flat on the bench, setting the beryl precisely in the center.

Ardyth lit two candles and placed one at each end of the table. “You don’t want the candles so close the flame reflects off the crystal.” She explained each step to her daughter, who hadn’t participated in a scrying before. Ardyth held her hands, palms facing inward, on each side of the crystal, close yet not touching. “There. Now, I can take a peek and see what reveals itself. Sometimes it’s stubborn and doesn’t want to cooperate.” Ardyth leaned closer and peered into the beryl. “The idea is to look into the center of the crystal, not the surface.”

Kat whispered, not wanting to distract from the rite, but eager to learn. “It’s so rough, how can you see—?”

“Shush,” Ardyth hissed, her eyes rolled back under her lids, revealing only the whites. It made Kat queasy when she tried to do the same.

Kat held her breath. Would she be able to see the vision, too?

“Are you giving it directions, Mom?”

“Of course. The witch directs the crystal; it does not lead the witch.”

After several minutes, Ardyth turned her gaze away from the crystal and looked at her daughter. “I didn’t see anything specific, except some people who looked like your father. I got a vibe that they’re family. It seems they live in the northern part of Siberia. Sort of east of Finland, but…wait, I’ll show you.” Ardyth murmured an incantation; then sketched in the air. As she moved her finger, a trail of light stayed suspended in the air, forming an outline.

Ardyth sketched some more lines, and the map filled in. The border of Finland appeared in the west, and a wavering line across the rest of the map sketched a vague outline of Siberia.

Kat frowned at the vast shape on the map. “That’s a pretty big area, Mom.”

“Wait. I’m not finished.” Ardyth drew some more lines. “We’re only interested in this part; that’s the West Siberian Plain.” Ardyth sketched an inlet at the top of the map. “Here’s a fjord, coming in from the Kara Sea.”

“Fjord? I thought they were only in Norway.”

“Not necessarily.” Ardyth pointed at Kat’s temple, the dictionary definition and a picture appeared in her mind: a long, narrow inlet with steep sides flowing into the sea; formed from glacier melt.

“Your father,” Ardyth said, pointing back to the floating map, “came from around there.”

Kat stared at the map and frowned, trying to recall her geography lessons.

Ardyth’s brow furrowed. “I also saw the word Sami. I’m not sure if it’s a name of a person or a place. I couldn’t find it on the map.” Kat frowned, and Ardyth touched her arm. “I know. It’s not much to go on. I’m sorry, but I can try again another time. Maybe when there’s less interference.” She glanced up at the roof of the cavern. “I think we’re having sunspots now.”

Ardyth removed everything from the table and stored it away. She returned to the stairwell and began the long ascent. Kat followed her silently, but her mind whirled with possibilities. Now she knew the general area her father came from, perhaps she could find his family.

Find out more about Marva Dasef:

Now for the best part. 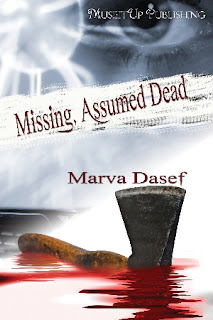 Win a free ebook drawn from comments. Select either MG fantasy "Bad Spelling" or adult mystery "Missing, Assumed Dead."
Marva, I have enjoyed having you as a guest and I can't wait to see who will win the free book!!
Until the next time, thank you to all the people who continue to follow my meanderings. Now that the month is over I will be going back to more of a normal routine, but tomorrow don't miss this blog!! I am helping a very good friend, Greg Fishbone, launch his new book, Galaxy Games: The Challengers and The Great Galactic Blog Tour. I think you will enjoy this very much, because there is a puzzle involved too.
Also, I have been given a couple of blog awards and haven't been able to do anything about them. I will be posting these in the next week.


Thank you to anyone who has bought my book, If I Could Be Like Jennifer Taylor. If you have a copy and would like it signed, please go to www.kindlegraph.com. You have to register first, which is easy. Then you click on my cover and I will send you a personalized autographed message.
Finally, congratulations to MuseItUp Publishing for their 1 Year Anniversary!!!! 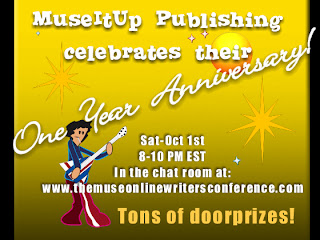 I hope a lot of you are planning to attend The Muse Online Writer's Conference. I will see you there!!!
Don't forget to leave a comment so you can be in the drawing to win a free book!!!

Posted by Barbara Ehrentreu at 4:16 AM