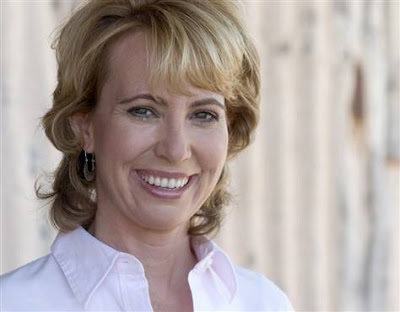 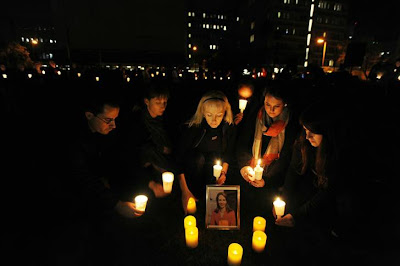 People hold a vigil in Arizona for the victims

This afternoon a story hit me so hard I felt like I was punched in the stomach. The amazing thing about this story is the news media was so awful in telling it. By now with the advent of Twitter and the mini attention spans of most people this is no longer new news. However, earlier this afternoon nothing was clear about this story. Following it on Twitter with my friend's updates I couldn't believe all of the discrepancies.
If you were unaware of the news here it is. Gabrielle Giffords, a Blue Dog Democratic Congresswoman from Tucson, Arizona decided to hold a meet and greet for her constituents in front of a local grocery store. A few years ago my own Congresswoman did the same thing at several places in her district. it was an informal thing with the Congresswoman available to answer our questions. Everyone got a chance for some one on one time with her. I didn't see the event for Ms. Giffords, but I imagine it was similar. Here is where the two events part company. At Ms. Giffords' event a crazed shooter decided to shoot her and also he fired at and killed a federal judge and turned his gun on the crowd shooting and killing a nine year old and many more people including several people over seventy.
When I heard the news that an innocent nine year old who had surely accompanied her parent to see democracy in action, had been killed, I lost it. I cried for the fact that this happened in my country! I felt like an intruder had come into my home and attacked me and my family. This shouldn't happen in America. I thought of those other countries where I had heard of political assassinations like Iraq, Afghanistan and India. My country wasn't like that at all. We practiced democracy where you could meet your Congressperson and convey your concerns. Yet here was the possibility that one of our Congresswomen might have been killed in a senseless shooting. I continued crying as I realized my dream had dissolved in a spray of bullets.
The news on the radio and TV was conflicting with some news people saying the Congresswoman had died and others who said the Congresswoman was alive and in surgery. I was horrified at the conflicting stories and prayed for Ms. Giffords to recover. When the press conference told us she was out of surgery and the prognosis was not bad I still felt sad and mourned the loss of the others who were shot and killed. I am still worrying about the people who were shot and praying for Ms. Giffords recovery. I was in an awful funk even after dinner when I caught Keith Olbermann's Special Comment. He said, "We need to put the guns down."
The rest of the comment followed my own thinking and so eloquently. You need to watch and listen to the video to see how very important this comment is.
Rewind back to March and follow the horror of the threats Ms. Giffords received after she voted for the health care bill. Her campaign office had its front door destroyed. She got threats almost constantly through the summer and at the same time several right wing talk show hosts began talking about violence toward political figures. Sarah Palin put up that map with the targets and is it coincidence that Tucson had a mark over it? People like Glen Beck and Rush Limbaugh continued stirring up the rhetoric until people started bringing guns to political rallies and Ms. Giffords' opponent actually held a campaign event at a shooting range!!!!
What is interesting is that minutes after today's shooting all of these right wing blogs including Sarah Palin's took down their websites and also Sarah Palin scrubbed her tweets alluding to any mention of violence.
Let me say that I hate guns and violence of any kind. I am against war and hunting for the most part. So the first thought that popped into my mind when I heard about the shooting was when will we be able to have some decent gun control??? The shooter was not the only one with a gun at Saturday's event. A few more people toted guns. Why, I have to ask myself, would someone bring a gun to a peaceful meet and greet of your Congresswoman? Also why was the judge there and was this a premeditated shooting? They are still investigating, but it is obvious that the violent rhetoric didn't help.
What do you think about this whole situation? Do you agree with Olbermann and myself that the violent rhetoric contributed to this shooting? Please leave a comment here.
Until the next time, thank you to my new follower and of course to all of my loyal readers who continue to enjoy reading my meanderings. For those who wonder why I haven't posted any poetry it's because I haven't written anything. I've been too busy with my novel and getting involved with my excellent publishing company, MuseItUp Publishing.
My radio show on Blog Talk Radio, RRW Live Tales from the Pages features Fran Lewis an old friend and Clay Ballantine. Please tune in on Thursday, January 27th at 3PM Central Time to join the discussion with these two excellent writers. In the coming weeks more guests are going to pop in here and right now the schedule escapes me.:) Check in to see who is here. I'm hoping to invite as many of my fellow Muse authors as I can.:)
Posted by Barbara Ehrentreu at 11:11 PM