Guest Author Barbara Ehrentreu with Her After Cover Reveal!!

First of all, let me say how sorry I am for not posting this summer. It was not an easy summer to get through and all that I had to say was very sad. So I decided not to blog until I had something great to tell you and here it is.

Here is the cover for After, the blurb and an excerpt. I am actually my own guest author this time!! As you can see I also have my photo here as well!!

I have a few questions that I have answered by myself:

Why did you write this book?
Actually the events in this book were inspired by own husband's heart attack and bypass surgery. I started it during NaNoWriMo about eight years ago and it kind of follows what actually happened in my own life. I didn't have a chance to finish it then, but a few years ago I picked it up and used the first sentence for one of Margot's workshops. She loved it and also Lea loved it too. So I decided to go back and polish it. I had already finished it and had it critiqued and beta read a few years before. However, I didn't think it was ready. I was right, because it needed to be updated and also the characters needed to be tweaked a little too. It took me two years to get up the nerve to send it in for publication and then it was accepted! I was able to share the joy with my husband last fall, but he is not here to share in the excitement of publication. I know he would be thrilled for me, though.

Why did you choose the title After?
Originally the title was When My Life Changed, but I realized that all the events took place after the phone call. So I decided to try a simpler one word title that would convey what the book is all about. It is about everything that happens to her after her father calls.

What are you working on now?
I have another YA novel which is called Footsteps on the Sand and it is about a 16 year old boy whose parents inherit a beach house in the Hamptons. He meets this cute surfer girl, Kristen and he wants to learn to surf. While trying to surf he has an accident and needs to rest in his room after coming back from the hospital. He opens his closet and finds an old surf board and his grandpa's journal. When he opens the journal his grandpa's ghost appears and this begins an incongruous friendship when he asks his grandpa to help him surf. There is romance and a little bit of conflict in it too. I am bringing this to the Children's Novel Workshop in Santa Cruz, CA in October where some professionals will critique it. I am very excited about going to this!!

Have you ever thought of writing a sequel to If I Could Be Like Jennifer Taylor?
Actually I had not thought about doing that until a friend's granddaughter asked her after reading it if there was a sequel. If I do, it will probably be set a couple of years later and probably be in both POV's. Of course this is just in my head now. I am really trying to concentrate on one book at a time.

Now I am very interested in learning more about After. 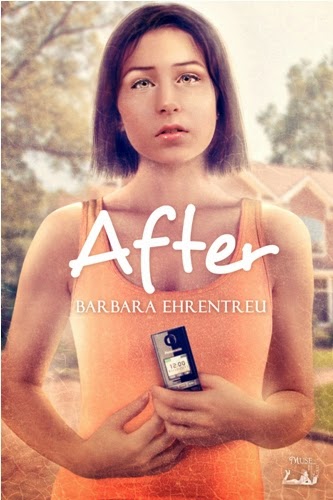 After is a story about the struggles Lauren Walstein, a fifteen-year-old girl, has to go through when her father suddenly has a heart attack and undergoes bypass surgery. In one phone call her life changes completely. Lauren is a character with whom most teens will relate. Her best friend since kindergarten, Joey, is going out with her enemy and they have grown apart. Before the phone call all she thought about was getting a scholarship for softball, and the Mets. Suddenly she must deal with both her father’s illness and being in school. The demands on her from both ends complicate the story. In the middle of all this, she finds she is developing feelings for her best friend that are more than friendly. Is he feeling the same or is he just comforting her? In addition there is Joey’s mean girl friend Amber, who doesn’t appreciate Lauren being in the picture. Will Lauren’s father recover? How will Lauren cope with her new feelings for Joey?

Let me go back and tell a little bit about myself. First of all, you might be thinking I’m a boy, but you’re wrong. My name is Lauren. I’m fifteen, and my sister is seventeen. I’m one hundred percent female. We learned about stereotypes in social studies and thinking sports can be only a boy’s thing is one of those. The teacher used blondes—and how people think they’re dumb or playing dumb—as an example. We had to come up with a few stereotypes of our own as our ticket to leave that day. It was then I realized my own parents thought in stereotypes.
I go against the stereotype for girls. I’ve always loved baseball. Joey loves it differently than I do. He likes to play it, but he memorizes all the facts and can spew them out any time they’re needed. I like the flow of the game and the feel of the perfect pitch leaving my hand.                                     Our friendship goes against the stereotypes, too. He and I clicked in kindergarten. The first day of school, Joey and I sat together and didn’t stop talking the whole morning. My parents told me that when the teacher tried to separate us we both put our feet on the ground and refused to be moved. She let us sit together for the rest of the year. But the next year the teachers were onto us and separated Joey and me for the whole year into different classes. We’d see each other in the hallway and wave. Sometimes I’d have a little tear in my eye when I saw him and it didn’t go away for a long time.
Before the phone call, there I was, eyelids drooping, in front of the TV, about to go upstairs to bed. Mom joined me for the last couple of innings. It looked like the Mets might do it. Though I tried, I couldn’t keep my eyes open. I was in the process of raising my tall, lean body off the sofa and placing one foot on the floor when the phone rang. Dad usually called Mom late when he worked nights, so I handed the phone to Mom and started upstairs. I didn’t get far. As soon as my foot touched the first step I stopped in mid-step. Mom was screaming into the phone.
“What? You want me to go out now and buy you Alka-Seltzer? You have indigestion?”
Dad never has anything wrong with his stomach. You could say it’s made of iron. I turned around and went back to the living room, catching bits of Mom’s conversation as I approached her. Even though I didn’t understand the reason for the phone call my heart started pounding and a sick feeling started in my stomach. I stood behind Mom.
“You have pain in your back, and indigestion? Go to the hospital! No, I’m not going out to buy you Alka-Seltzer.” She slammed down the phone and gave into hysterics.
“That stupid man. He has to go to the hospital. He’s having a heart attack. He is so insufferable. I’m calling the doctor.” Tears rolled down her face as she frantically punched in the number for the doctors we use. She described Dad’s symptoms to the answering crew and they put her through directly to the coronary doctor on call.
“Okay, I’m calling him back. He’s insane,” she said to no one in particular, but really to me and my sister. Diane, hearing all the screaming, had run down the steps and put her arms around Mom, who was now sobbing uncontrollably, but still punching in Dad’s number.
Holding the phone and wiping away tears she spoke to him again. This time it sounded a lot more like the way she spoke to my sister and me when she wanted something done for her. I wrapped my arms around myself and prayed this was a nightmare.
“I called the doctor and he said you need to go to the Emergency Room as soon as possible.” Then she added her own Mom advice. “Take two aspirin and we’ll meet you there.”
My life changed at that precise moment: 9:30 p.m. Sunday, September 24.And I never even realized it had happened.

Thank you, Barbara for being my guest author and I wish you a lot of luck and great sales with After.
Until the next time, my guest will be Penny Estelle, who will be talking about her new book Bumped Back in Time.  She is stopping by as part of her month long blog tour. Also my Blog Talk Radio Show, Red River Radio Tales from the Pages will be on Thursday, September 25 at 4PM EST with guests Ken and Anne Hicks, Lorena Bathey and Penny Estelle.
Posted by Barbara Ehrentreu at 12:57 PM