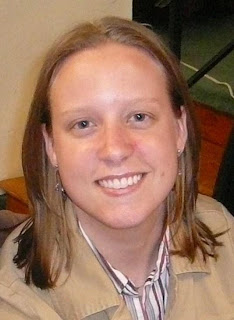 Katie Carroll began writing after her 16-year-old sister unexpectedly passed away. Writing was a way for Katie to help her sister live on in the pages of a story. It also made her realize that she wanted to pursue writing as a career. In addition to penning novels for teens and kids, she edits puzzle magazines, plays soccer, and collects signed copies of books. Katie lives in Connecticut with her husband and son.


How sad that must have been for her. I wonder how many authors have started writing to help ease the pain of a loss. Also, Katie lives in my state!!! How exciting is that!!!


Here is a little bit more from Katie about how she creates her characters:

As a writer, I’m always mining my own life for material, but nothing I write is truly autobiographical. In Elixir Bound several of the characters are inspired by real people (and one is even named after a real person). Note I said “inspired.” It’s not that I actually wrote a book about people I know. Even if Elixir Bound didn’t take place in a made-up world, it’s still far from a memoir.

Like real people, though, characters should have more than one side to them, and they should have faults. Maybe you know someone who is super sweet and generous with her time. She doesn’t lose her temper very often (and here comes the flawed part), but when she does, watch out! The flip switches and she becomes a crazy person.

Okay, I’m exaggerating a bit here, and the person I know isn’t nearly that bad. But the character inspired by this real person is that bad because the story calls for her to be that way. Characters are often larger than life, and that’s a good thing. They should be. (Larger than life doesn’t necessarily mean loud or in-your-face. It could be a character is shy, and the larger than life part is that they are so shy it is debilitating.)

Reading gives us the chance to live vicariously through a character. I like when I see myself in a character, but I like it even better when that character is an exaggeration of any self I can imagine (good or bad). So provide your readers with interesting, dynamic characters that are more than the real people that inspire them.


That is so true, Katie. Characters create and drive the plot. Readers will continue reading to find out what will happen to the character.

Let's find out more about your book, Elixir Bound. 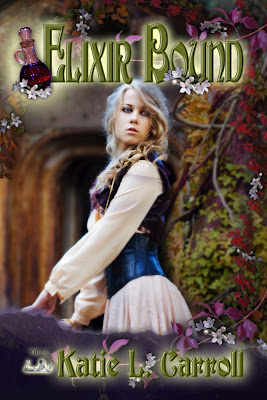 Katora Kase is next in line to take over as guardian to a secret and powerful healing Elixir. Now she must journey into the wilds of Faway Forest to find the ingredient that gives the Elixir its potency. Even though she has her sister and brother, an old family friend, and the handsome son of a mapmaker as companions, she feels alone.

For it is her decision alone whether or not to bind herself to the Elixir to serve and protect it until it chooses a new guardian. The forest hosts many dangers, including wicked beings who will stop at nothing to gain power, but the biggest danger Katora may face is whether or not to open up her heart to love.

e w
Katora remained perfectly still; her father’s words deflated the balloon of anger building inside her and filled the hole with cold shock.

Pop stood and began to pace while he explained. “Deep in Faway grows the plant that gives the Elixir its potency. The Kase family and our ancestors have harvested this plant and acted as guardians of the Elixir for hundreds of years. We developed methods for increasing its potency and have passed these secrets down for generations. I am the current guardian.”

Pop the guardian of the greatest healing Elixir ever available to humans? Could it be true? As he stood in front of Katora, his eyes betrayed no hint of a lie. How did she fail to notice this all her life? And what did it mean for her?


Snowflakes swept across the southern tip of the Great Peninsula and covered Faway Forest. The heavy flakes weighed branches down on their trunks, like limbs of a predator closing in around a victim. A white shroud always blanketed the more northern Blanchardwood, but Faway had escaped the winter weather for hundreds of years. A storm like this usually bore a message, though deciphering it could prove difficult.
On the outskirts of the forest in the small town of Tussar, Katora Kase stood among the essenberry vines growing along neat lines in the field behind her house. She marveled at the strange precipitation. None of the living Tussarians—even the elderyears—had ever seen snow before. Katora smiled as the flakes tickled her face and melted.
Down the aisle, Katora’s younger sister, Kylene, twirled in the swirling snow. With arms straight out, face to the sky, the girl’s long blond hair fanned out around her. This weather suited Kylene; Katora identified with the rain, deliberate and relentless. In the snow, Katora almost forgot she was a primeyear woman about to take over her family’s farm. She envied the carefree way her sister danced with the flakes.
A snowball flew out of the vines and thumped Kylene in the chest. Bhar, the youngest Kase sibling, laughed as his tall figure squeezed between the rows. Although the oldest of the three, Katora was the shortest, her athletic body somewhere between Bhar’s bulky build and Kylene’s willowy figure. Kylene’s white-blond hair looked bright against the snowy backdrop, while Bhar’s golden hair, which matched Katora’s, looked dull and wet.
Kylene grabbed her own snowball. Soon a friendly battle consumed Bhar and the younger sister. Confident no one paid her any attention, Katora stuck out her tongue and caught a big flake. A pinprick of ice froze the tip and disappeared in an instant. Katora’s smile lasted about as long when she realized what snow meant for the first crop of the year.
Kase Farm had faced hardships in the past, but not since before Katora was born. The Kases used essenberries to make essence, a popular but rare beverage the family fermented to capture the mood of the growing season in a bottle. Over the years, Katora learned how to grow the essenberries and turn them into essence. A bad first crop meant less essence to sell, which meant less profit, which meant—well, Katora wasn’t exactly sure what that meant. She sighed. Given that she didn’t know as much about the business end of the farm, it was yet another thing she must learn.
Katora plucked a tiny essenberry from the vines and squeezed. Frozen solid. She tossed it in her mouth and let the warmth release the sour juices of the unripe fruit. If only she could eat all the frozen essenberries so they didn’t go to waste. Like any good farmer, Katora hated waste.
A snowball smacked her in the back of the head interrupting her inspection of the vines. She turned to see Bhar’s fiendish grin. Bhar’s age put him barely in his primeyears, but he often acted like a youngeryear.
“You dirty little—” Katora yelled as she grabbed snow and threw it at him.
She wasn’t really annoyed; the distraction brought her some relief. Although it would have been fun to join the fray, Katora knew she must tell Pop about the ruined crop. She sprinted away, snowballs chasing her every step. She slowed to catch her breath when she neared the house and spotted Pop in the window. Deep lines etched his brow. She caught his gaze and smiled. His return grin warmed the wrinkles off his forehead. He met her at the back door.
“Don’t worry about the essenberries.”
Pop could always read her mind when it came to the farm. “It’s early in the season, and we’ll be able to make up for what we lose today.”
She brushed the snow from her clothes. “How?”
The corner of his eye pinched together. “I said you needn’t worry about it.”
The casual tone didn’t match his pensive face. Kase Farm was the only source of essenberries in the Great Peninsula. Each vintage produced a unique flavor. Memories vanished with even one harvest’s failure.
Katora worked every day to capture in a bottle the triumphs and tragedies of the year. To forget a season was to forget her own past. Pop pounded this lesson into her brain over and over, and now he instructed her not to worry.
She tried a different angle. “But won’t this create a financial hardship on the farm? I have to know these things if I’m going to run it.”
“You’ll learn all these things in time. One lost crop won’t bankrupt us.”
Pop rubbed the stubble on his face. Most of the whiskers were the same dark brown as the hair on his head. For the first time, Katora noticed a few gray ones poking out of his chin. Pop stroked his beard only when he worried. He remained silent.
Never one to let someone brush her off, Katora persisted.
“If that’s true, then why were you frowning?”
“I don’t like this weather.” The next part he muttered to himself so Katora almost missed what he said. “Weather like this means a short sleep before an inevitable disturbance.”

Please leave a comment for Katie, since she is giving away a free book to the lucky winner of the comment drawing!!

Thank you for being my guest author, Katie and I hope that since we live in the same state we will meet some day.

Here is where you will find Katie and her books:

Here is a fun activity for anyone who lives in Connecticut. My poetic friend, Donna Marie Merritt is having a reading tonight, September 10, 2012 at Mystic, CT called Poetry and Music. She would love for anyone who enjoys poetry to join her. Her poetry is lyrical and tugs at your heart. She is a joy to listen to and I am looking forward to seeing her read.

I am extending the comment time for my guest author, Kathy Rygg. Kathy is giving out a free copy of Animal Andy to the lucky winner of the comment drawing. This is such a great MG book and I'm wondering why more people haven't commented. Here is your chance. Though I am entertaining a new guest author today, please go over and leave a comment for Kathy. You just might win a free book!!
Meet Guest Author, Kathy Rygg.


Posted by Barbara Ehrentreu at 3:00 AM