Today I am very happy to bring you an author who has graced this blog many times. I am very pleased to be one of the stops on her whirlwind blog tour for her new book: Setara's Genie!!!

As always she has brought with her some amazing photos to let us know more about her new book. Before we start learning about the book, though, here is a little bit about Marva if you have never known about her.

Marva Dasef Bio:
Marva Dasef lives in the Pacific Northwest with her husband and a fat white cat. Retired from thirty-five years in the software industry, she has now turned her energies to writing fiction and finds it a much more satisfying occupation. Marva has published more than forty stories in a number of on-line and print magazines, with several included in Best of anthologies. She has several previously published books and and the Witches of Galdorheim Series from her super duper publisher, MuseItUp.

SETARA’S GENIE
A girl, a genie, a few demons. Would could go wrong?
by Marva Dasef

A Bottle of Djinn

Genies or djinns are great fun. Robin William’s genie in Aladdin was a hoot. But when is Robin Williams not a hoot? Okay, don’t tell me about One-Hour Photo, Insomnia, or Death to Smoochy. Nobody bats a thousand.

Let’s not talk about I Dream of Jeannie. That is clearly a complete and utter corruption of the wonderful race of magical beings brought to us from Muslim tradition. So, here’s the skeenie on genies.

In Arabic, a genie (also jinn, Djinn, jinni) is a supernatural creature which occupies a parallel world to that of mankind, and together with humans and angels makes up the three sentient creations of God (Allah). Possessing free will, a djinn can be either good or evil.

The Djinn are mentioned frequently in the Qur’an, and there is a Surah entitled Al-Jinn. While Christian tradition suggests that Lucifer was an angel that rebelled against God’s orders, Islam maintains that Iblis was a Djinn who had been granted special privilege to live amongst angels prior to his rebellion. Although some scholars have ruled that it is apostasy to disbelieve in one of God’s creations, the belief in Jinn has fallen comparably to the belief in angels in other Abrahamic traditions.

Golly, that’s not near as much fun as Robin Williams. Still, a supernatural being that can wreak havoc on humans is right up our alley, right?

In my book, Setara’s Genie, Basit, the genie, serves Setara. Well, ‘serves’ is a bit of a stretch. He suggests, advises, and pretty much makes her figure out how to get things done. Every once in a great while, he will whomp up a little magic if Setara is about to fall off a cliff or something else dangerous. 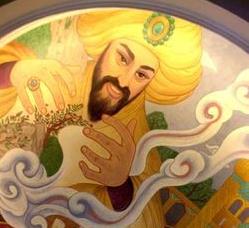 Basit appears in all of Setara’s adventures except one. In that story, an evil genie has tricked Basit into the bottle that Aladdin put him in years before. He introduces himself to Setara as Sharif, Apprentice Djinn Second Class, and claims to be taking over for Basit while he’s missing. Setara is naturally concerned for Basit. The evil genie (disguised as a boy djinn) wants to lure her into helping him kill the Great Vizier ---- screeeech! Calling a halt here. The plot is too complicated to explain in full.

The short of it is that Setara and her gang have to rescue Basit from the bottle. To do that, they have to put the bad genie into another bottle. Setara, Kairav the water demon, Azizah the cave demon, Sheik the dog, and Sulawesi the eagle are all needed to put that dang bad genie back in his bottle and get Basit out.

To learn what else happens to the gang, you’ll just have to buy a copy of the book.

Abu Nuwas sits in the bazaar on his threadbare rug; a cup and sign proclaim him a teller of tales. For one small coin, he bids passers by to listen. A poor girl, Najda, sells spices from a tray. Would he, she asks, trade a tale for a packet of spice? Abu Nuwas agrees and begins the epic adventures of a girl and her genie.

As did Scheherazade before him, Abu leaves Najda hanging in the middle of each yarn to keep her coming back. Between stories, he questions the girl about her life. He discovers that she’s been promised in marriage to an old man whom she hates, but she must wed him to save her sick mother’s life. The rich bridegroom will pay for the doctors the mother needs. Meanwhile, Najda sells spices in the market to earn enough money to keep her mother alive.

He relates the adventures of the bored daughter of a rich merchant, Setara, and her genie, Basit, as they encounter the creatures of legend and folklore: a lonely cave demon seeking a home; a flying, fire-breathing horse who has lost his mate; a dragon searching for his family; an evil genie hunting for the man who put him in a lamp; and a merboy prince cast out of his undersea kingdom.

Azizah set her gently down again. Setara straightened her clothing. “Have you seen Basit lately? I called him, but he didn’t show.”

“No, we’ve not seen him since we fought with the dragon demon. Wait! He did come by and told us the happy outcome of your visit to Semidor. It was good the adventure ended with a family reunion, rather than a slaughter. Basit also mentioned that Habiba and Hasib had twin foals, a filly and a colt.”

“I definitely need to get to Semidor to see them. I’d bet they’re as cute as can be. Any magic passed on?”

“Yes, indeed. Both of them fly and breathe fire. Hasib is a proud father to be sure,” Azizah answered with enthusiasm then glanced toward Kairav with a crafty gleam in her eye. Setara giggled, understanding Azizah’s look immediately. Kairav grinned broadly at his mate and winked.

The air next to Nasreen popped, and a solid figure appeared. The mare whinnied and stamped her front legs then shied away.

“Basit!” Setara exclaimed and then looked again. The genie hovering before her was not her Basit but another one entirely.


“At your service, Mistress Setara.” The genie swept a deep bow toward her. He looked nothing like Basit, although Basit didn’t always look precisely like Basit. This genie seemed younger, much younger. Indeed, he looked like a boy no more than twelve or thirteen years old.

Setara stared at the teenaged djinn. She didn’t realize genies were born and grew older like people. “Who are you?”

“My apologies. Let me introduce myself. I am Sharif, Apprentice Djinn, Second Class.” 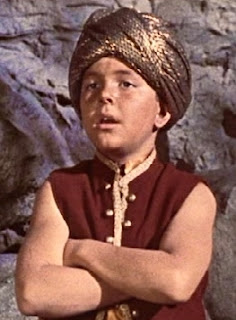 “I see.” Setara stared at the boy and pulled her ear thoughtfully. She didn’t know what to make of this development. “Where’s Basit?”

“Unfortunately, he’s been detained by circumstances beyond his control. When your call came into Central Spell Casting, and Basit didn’t respond, they sent me as a replacement. What is your immediate need?” Sharif bowed again.

“All right. I can certainly pass along any messages to Basit. However, if I may be so bold, isn’t there anything you want?”

“No. I’m...I’m fine. Um, thank you?” Setara tossed a glance at Azizah and Kairav. They both shrugged. Basit wasn’t exactly prompt, but he always showed up eventually. This was a highly unusual development.

Sharif shook his head sorrowfully. “I hesitate only because not picking up his messages is unusual for a djinn. I’m afraid he may be in danger.”

“Do you really think Basit is in trouble?” Setara asked anxiously. “We have to help him!”

Setara suspected that he was fishing for just that response. Basit was the only genie she knew. Perhaps Sharif, being an apprentice, would be more likely to grant wishes. She had always supposed she was supposed to do the wishing, but Basit preferred to come up with ideas on his own.

“Yes. I would like—” Setara hesitated. She knew she must word any wishes carefully.

“I would like to find Basit.” She hoped that was simple enough to not be mistaken.

Sharif put his finger to his temple and closed his eyes for a few moments. Finally, he opened his eyes again and shook his head. “I’m sorry. I can’t find him. However, I know someone who might.”

“Very well. Can you bring this person here, or do we need to go to him, or her?”

“We’ll need to go to him. He is unable to travel right now. After all, he is in his tomb, and it’s not easy for him to get around.”

“He’s dead?” Setara did not like the idea of conjuring up the dead.

“Not exactly dead, just sleeping in his tomb for a few years. He is the Great Vizier who used the blood of Azhi Dahaka to create the warhorses like your good friend, Hasib.”

Setara’s lips pressed together. She thought a moment about visiting a tomb and shivered. Shrugging it off, she said, “If this vizier can help us find Basit, then we will do whatever it takes.”
(End of excerpt)


Marva, once again you have created a world in which anything can happen!! This looks like another winner!!! We're going from witches to djins or genies. This time too, we have a teenager. Almost anything can happen with this young genie. I'm excited to read the book and find out more.

Thank you for visiting and I hope lots of people will enter the contest for the prize drawing. Just leave a comment here for Marva or a question. She will be happy to answer you when she can. Don't get discouraged if you don't see your comment right away. This blog has moderated comments, so I need to approve them first.:)

For all those who are following my husband's health, I am happy to report he is feeling much better,

I will be interviewing Amy McCorkle on my radio show RRWL Tales from the Pages on Thursday, August 23 at 3PM Central Time and 4PM EST. By then I should be finished reading her book, Gladiator, which is not PG, so tune in and find out more about this very sexy novel from another Muse author!

In September I will be interviewing several authors here, one of which is the delightful Cyrus Keith with his book, Becoming Nadia. Also I will be having Kathy Rygg here that same week and the following week I'll be hosting Katie Carroll.

Don't forget to leave a comment for Marva!!! Thank you for visiting, Marva. It was a pleasure as always to find out about your new book, Setara's Genie and to be hosting you again!!

Posted by Barbara Ehrentreu at 8:45 PM