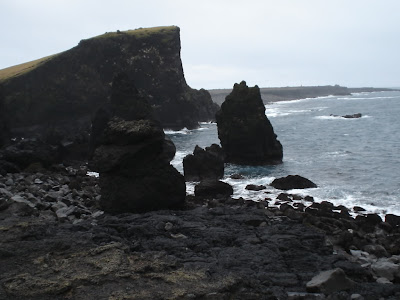 I'm posting these late, of course, since my week has been full of real life events. However, things are winding down a little and I had a chance to write for each day. I consider this a gift when I have a chance to write lately. As usual I am using the prompts from Poetic Asides with Robert Brewer and posting my poems on the comment pages as well.
Here are my poems for Days 6, 7, 8, 9, 10, 11, and 12:
April 6, 2011
Prompt: Title your poem Don't ------.
Don’t worry, coast

Prompt: Use What if?

all the animals disappeared
and the world stood barren with
bare trees and rivers dried up
Becoming waddies in the middle of
deserts?

What if the water that plays
Over the smooth stones stopped
And there were no snow or rain
Where would the water now running
Freely through our pipes come from?

What if the abundant wheat and corn
Fields were plucked clean and the husks
Stood drying in the wind while the last
Ear of corn became more valuable than
Gold?

Would there be those who would pounce
Upon that ear or hold themselves in
check. aware that the wide arm of the
marauding hordes might sweep away the
entire tenuous house of cards upon which
we built our lives?

Prompt: Write a poem for celebration

On the trumpeted day
my words will fly across
the internet on their own
merit strong at last after
so many months spent honing
them and polishing until all
were as they should be
Alighting with their gemstone
brilliance upon websites to sit
and wait for eager readers –
Some fans have been there at the
gate cheering the fledgling
as she shed her unnecessary
baggage and prepared to move
Into the world in her awesome
cover dressed for success.

Prompt: Write a poem about a specific time
2:46 AM

Up again and the hour creeps ever later
as I play catch up with my fingers
Writing poems as if in a race
Hurrying to write for all the days
Hoping to pull ahead and at last be
side by side with each prompt
Poetry sliding out of me
My muse had flown away on
vacation for a few days
Maybe lying in that hospital bed
with Hal as he waits
Not sure if what he needs will mend
hhm back to the young man with
strong legs standing for hours.
My muse wraps its arms around me
aware I need the TLC and sheds its
aura upon the scene allowing a
chance to write while hope slips under
the covers.

Prompt: Write a poem with Never Again as your first line
Never again

Never again do I want to wake to the
sight of a building destroyed by an airplane
Horror scenes playing out in front of me on
my TV like a bad sci fi movie come to life
And though at the time never realized
Llfe changing in a moment
Becoming a security check for all
Fear replaced the glibness
Of the pre- 9/11 innocence
Like toddlers playing in a secluded safe
playground we never dreamed such a thing
could happen.

Prompt: Write a poem with the idea of Maybe
Maybe

All of those forwards bringing me news
of huge windfalls about to happen for me
If only I send out these photos to 7 or 10 or 12
friends who must do the same will work their magic?
Or perhaps Publisher’s Clearing House will show
Up outside my door with balloons and a giant check
made out to me?
Maybe the disaster at Fukushima won’t destroy a beautiful
creative and centered country so far across the world from
us and so burdened with nature’s growing pains

Maybe when my book is published
it will catch the interest of the girls who now follow
vampire’s lives and have forsaken the stories of girls like
themselves.
Maybe I’ll wake up and be ten pounds thinner, millions of dollars richer
and millions of brain cells brighter.
Or maybe the maybes will all go away
and I will learn to live in the yeses.

Though you wished for magic
Most of it was just tragic

I wanted to write a form poem
About the wind, but the form
Stifled my words as if a noose
Were around my fingers
Keeping them from tripping across
The keys creating them
And I realized with a deep felt sigh
My muse does not like being locked
In a form of any kind
But like breasts after a long day
Must swing free to expand its
Essence

The wind’s howl wraps around
the bricked space and ricochets
toward the lonely expanse of water
Back and forth like a ghostly game of
ping pong the wind screams its eerie song
Whoooooo, whooooooo, whooooo
And I imagine abandoned ships run aground
With the trapped souls of the unfortunate
Victims yelling for release
Bringing goose bumps all over my body
Forcing me to hide beneath covers and stop
Up my ears to keep out the crazed sound of the wind.
That's all for now. Thank you to all who have commented and for any new people who might come across this post. As always, thank you to my followers who continue to read and enjoy my meanderings.
A few blog posts ago I offered you a free book possibility when you left a comment on the post for Lori Z. Scott. Since Lori is going to be on my Blog Talk Radio show, RRWL Tales from the Pages for this month, I have decided to do the drawing on the air. So anyone who left a comment on this post: Meet Lori Z. Scott: A Many Published Author should listen in on Thursday, April 28th at 3PM Central, 4PM EST to see who wins the drawing.:) Besides Lori on that show will be Maxine Thompson, another many published author. It should be a great show!
Also, Monday, April 18th I will be a guest on Karen's Chaise Lounge and I am introducing my main character, Carolyn Samuels from my first novel, If I Could Be Like Jennifer Taylor being published in September by MuseItUp Publishing my wonderful publisher. Come over and check out a new me. I will be in avatar form. It's going to be a lot of fun!!!!
Posted by Barbara Ehrentreu at 11:44 PM