What Happens When the President Visits Your City! 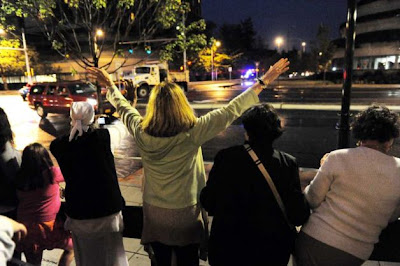 President Obama leaving Stamford. See the sanitation truck.
from: Stamford Advocate -President Barack Obama is greeted with cheers as he is whisked down Tresser Boulevard in the presidential motorcade after attending a fundraiser for Democratic Senate hopeful Richard Blumenthal at the Stamford Marriott Thursday, September 16, 2010. Photo: Keelin Daly / Greenwich Time

Last night we wanted to get some take out food and go home and eat it. That isn't such an unreasonable idea, right? You would think you could go to your own favorite restaurant, get your food and get home if the place is only five minutes away. But last night that five minutes turned into an hour.
We should have realized something was going to go horribly wrong when the street where we usually turned to go pick up my daughter was blocked by a garbage truck. At first I thought this was a horrible misjudgement by the sanitation crew driver, but no. Once we picked up my daughter the heavens opened up and it started to pour. So I had to go to the department store (I won't say which, because then I'd have to balance it.) The street with the department store was blocked and we could only turn right. That was where we had to go, so it was all right. After I got out of the store we drove to the restaurant without any trouble. It didn't seem like anything could go wrong. We actually bought two different kinds of food: sushi and hot burger-type. With the two bags separated we were sure we could get home in plenty of time to keep the food both cold and hot. We figured we'd get home in the usual five to ten minutes.
But President Obama was in town speaking at the local Marriott and the police had closed the area from traffic. What that meant was when we tried to take the road to go home it was blocked. The sad thing is that the policeman who was doing this had no idea why or how to direct us to another route to go home. I felt like we were mice in a maze as we kept finding dead ends due to the roads being blocked. The policeman had told us to head north, which was away from where we needed to go and we kept going, not knowing another way to get home. Even though we have lived here since February we don't know the little side streets and how they connect with each other.
So I took out my trusty traffic app and tried to figure out a new route. I found one, but my daughter, who was driving, didn't want to know any of my alternative routes. My other daughter in the back of the car kept worrying about the sushi. It was already a half hour since we had picked up the food and home was nowhere in sight. We stopped and got out an insulated bag (Yes, we are those people who keep insulated bags and Whole Foods fabric bags in our trunk) and then got back on the road searching for a street that would take us home. At this point with the hot food and the sushi in the back my daughter suggested we stop and eat there. But we were bringing the food home for my husband. So we continued, but the daughter who was driving started screaming at me in reality show volume that she didn't want to hear any new routes as we continued to find roads blocked. Finally we were on the outskirts of the city and there on a stretch of empty road we saw a line of cars with a police escort and figured that must be the motorcade. We breathed a sigh of relief, but it took us almost another half hour to get home. The roads opened up and it was smooth sailing back home. I was sad that we didn't actually get to see Obama, because we are still big supporters of him and his policies. But really, the amount of security around the president is getting ridiculous! We basically drove around in circles for the hour. There needs to be more concern for the people in a city where the president goes in the future.:)
Now think of this scenario: There was a huge storm. Obama was in town. We had hot and cold food in the car.:) It was the perfect storm! LOL. By the way, the sushi was fine and we gobbled up the hot food, which was still remarkably hot!:)
*********************
Access Books and Airlift to LA
An author friend of mine Kari-Lynn Winters sent me this and I thought I would help her publicize it. Anything that helps children read is for me!! I know this is a good cause and I will be happy to help her.
All children should have the opportunity to learn to read!

Please help us spread the word pass and give impoverished families access to books by posting this press release on your blog.


Los Angeles – As part of their ongoing commitment to strengthen inner-city school libraries throughout Los Angeles and beyond, Access Books has joined forces with a team of Canadian authors to help Ralph Bunche Elementary (16223 Haskins Lane, Carson, CA 90746-1092) on October 2, 2010 at 9 a.m. One of 25 elementary schools in the Compton Unified School District (CUSD), Bunche is in desperate need of books for its 450 students.

Access Books, “Air Lift to L.A.” and a team of volunteers from Bunche will spend October 2nd revitalizing the library by painting murals and cataloging brand new books. In addition to the books, Access Books will provide a reading rug, rocking chair and sofa to create a warm and inviting environment for students. Five authors from Canada will be on hand for the event and to give fun and exciting presentations to the students.

The participating authors are:

Kari-Lynn Winters, author Jeffrey and the Sloth, On My Walk, and other award-winning books.

Jill Murray, YA author of Rhythm and Blues and Break on Through


Sadly, only 48 percent of Bunche’s students are scoring “proficient” or “advanced” in English & Language Arts on the California Standards Test. Research has shown that the best predictor of how well a child will learn to read is the number of books to which he or she has access, but 61 percent of economically disadvantaged children don’t have age-appropriate books at home. The students of Bunche Elementary fit this profile: 90 percent live at or below the poverty line. According to a 2009 report from the Jumpstart Foundation, communities ranking high in achievement tests share a common denominator: an abundance of books in their libraries.

California's Department of Education recommends 28 library books per student, according to the February 2010 draft of its School Library Standards. Bunche, however, has a mere three books per student. Therefore, Access Books has set a goal: Collect at least 5,000 books for Bunche’s library and classrooms. Many of these will be brand new, popular fiction titles – books that have been carefully selected to get students excited about reading.

Access Books’ partner for this endeavor, “Air Lift to L.A.,” grew wings after Canadian children’s author Helaine Becker visited a Long Beach elementary school and saw the empty shelves. Shocked and saddened, she rallied her Canadian colleagues and started a book drive. “The conditions [in Los Angeles] are on par with the worst of the Third World countries,” she writes on the “Air Lift to L.A.” Facebook page. “Actually, they are worse, because in much of the Third World, people are doing their best to raise their standards, while in Los Angeles, conditions have deteriorated abysmally in the last ten years.”

Bunche has just moved its campus library into a new, larger space to afford room for growth, but unfortunately, many of the shelves are bare. The library assistant nicknamed the library “The Dream Shop,” but with so few books, its dreams have yet to be realized.

California ranks last in the nation in funding for school libraries, spending less than one dollar per child. Although the 2011 federal budget proposal includes a $400 billion investment in education, there’s no mention of federal funds specifically geared toward school libraries. According to Sandra Barnett, head of the American School Library Association, “the budget is proposing to take away the last access to literacy for these kids in high-poverty areas.” The American School Library research data clearly shows that students with access to school libraries and good books score higher in state reading scores and are more interested in reading.

“I think the big issue is that we really need to make reading part of school and make reading fun and interesting,” said Rebecca Constantino, P.h.D., the founder and executive director of Access Books. “And that starts with having a good library.”


About ACCESS BOOKS: Access Books provides quality, high-interest books to Southern California's most impoverished school libraries. Since 1999, they have donated more than a million books to school and community libraries in the greater Los Angeles area. Access Books has been featured in USA Today, the L.A. Times, the New York Times and School Library Journal among many other media outlets. Access Books’ founder, Rebecca Constantino, is a recipient of Oprah’s “Use Your Life” award. She has published over 100 articles and a book in the areas of literacy development, equity in education, urban school and cultural perspectives of language acquisition.

Give a Child a Book, She’ll be Happy

Give a Child a Library, She’ll be Literate

www.accessbooks.net
As always, thank you to my new readers. And thank you to the people who continue to read my crazy meanderings. Has what happened to us with the president in our city happened to you? I know that the security is necessary, but what do you think of closing streets that aren't even near the president? Please leave me a comment here.
Coming in the next blog is my interview with Jane Kelley. Jane Kelley, author of Nature Girl reviewed on my last blog post and Sandro Isaack, author of Stork, MIA will be my guests on Thursday, September 23rd on my radio show, Red River Writers Live Tales from the Pages. Also, please check out my article in Examiner.com on the book festival in Jersey City, New Jersey this weekend, September 18th, A Tale of Our City.
Posted by Barbara Ehrentreu at 9:24 AM